Blu DeTiger: “Being Bold Is the Way to Go if You Have a Crush”

Blu DeTiger is all about the bass. After touring the world with the likes of Caroline Polachek and FLETCHER, she went viral multiple times on TikTok with her bass covers and released her first single in 2019. The hype around Blu DeTiger only grew and eventually led to the release of her EP ‘How Did We Get Here?’ last year, and she is now presenting the project on an extensive tour. During Blu DeTiger’s stop in Brussels, we visited her an hour before her first Belgian show and got to know the singer behind the soundtrack of our summer.

You’re on your first solo European tour. That has to be something that was on your wishlist, wasn’t it?

Yes, it has been crazy! The first show was yesterday in Paris, and it went great. Now, it is my first time in Brussels. Before the tour, I could never believe I had fans in other countries, but apparently, I have!

You wrote most of your music during COVID, which was a time when you only had a connection with your audience through TikTok. Was it difficult to put these songs in a live setting?

It was kind of fun because I experimented a lot. A live setting is so different from when you hear a song through your headphones. So, I was excited to put this show together because I haven’t done that for two years. There is just so much you can do during a performance.

You toured before. So, do you have experience?

Indeed, I’m thankful for that because now I’m seasoned as a performer. Just knowing how everything works like the soundchecks, being in different places, and the sleeping schedule… It takes a second to get used to. But it is the first time that I play on my own. So, it is a bit different. 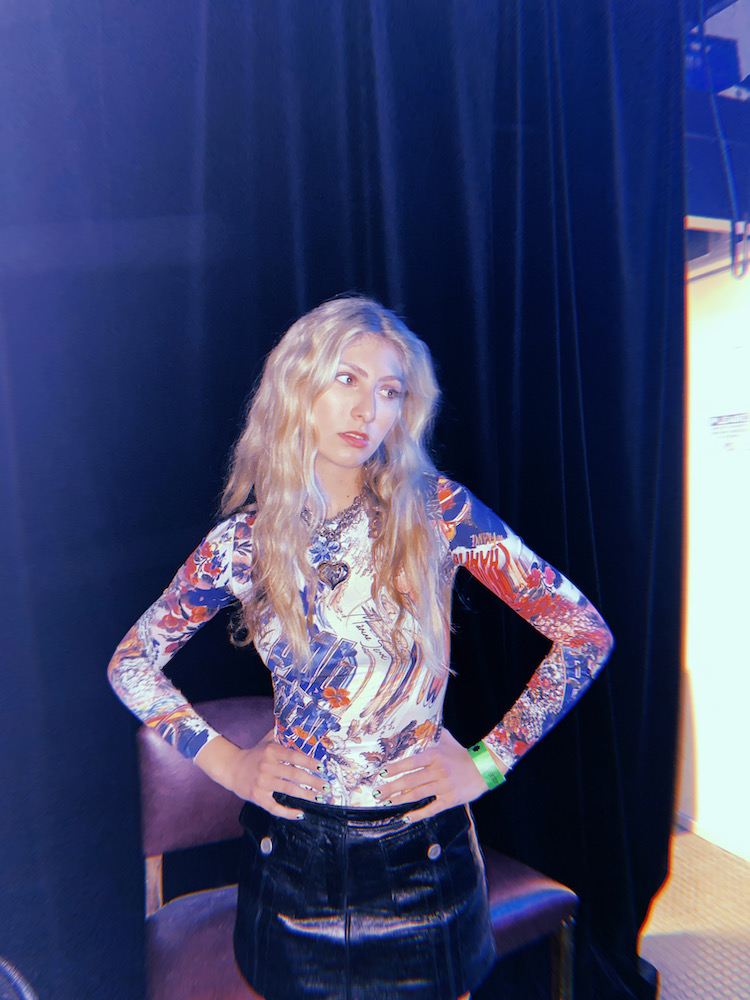 Do you think that performing with other artists inspired you?

Totally, I think everything influences each other. I was making my own stuff, but I didn’t really have a plan like, “this is what I’m going to do!” Luckily, it worked out! I think everyone you work with or for will inspire you.

Who or what inspired you to pick up a bass?

I started very young. My brother—who I will meet in Amsterdam tomorrow, yay—was a drummer, and I also wanted to play an instrument. I wanted to be different, so I chose to play the guitar. Now, I can play more instruments, but at that time, I chose a guitar because it was more unique and that motivated me. I still love it!

What was the main concept of your EP How Did We Get Here?, which came out last year?

The EP was inspired by the pandemic, of course. I was writing and conceptualizing a lot during that time. Much of it was nostalgic, dreaming of previous times, and New York, the city I grew up in.

New York is a loud place to live. Are you someone that needs silence to make music?

Oh, no! I can do both, but I’m so used to sounds that dead silence freaks me out. When I go to LA, it is really quiet, and I feel the urge to go outside, to look if there are other people around. So, I love New York and the crowds, but I’ll make music everywhere!

There is a song called ‘Hot Crush Lover’. Is there someone you have a crush on musically or personally?

I would say: yes, all the time but that is all I’m going to say! 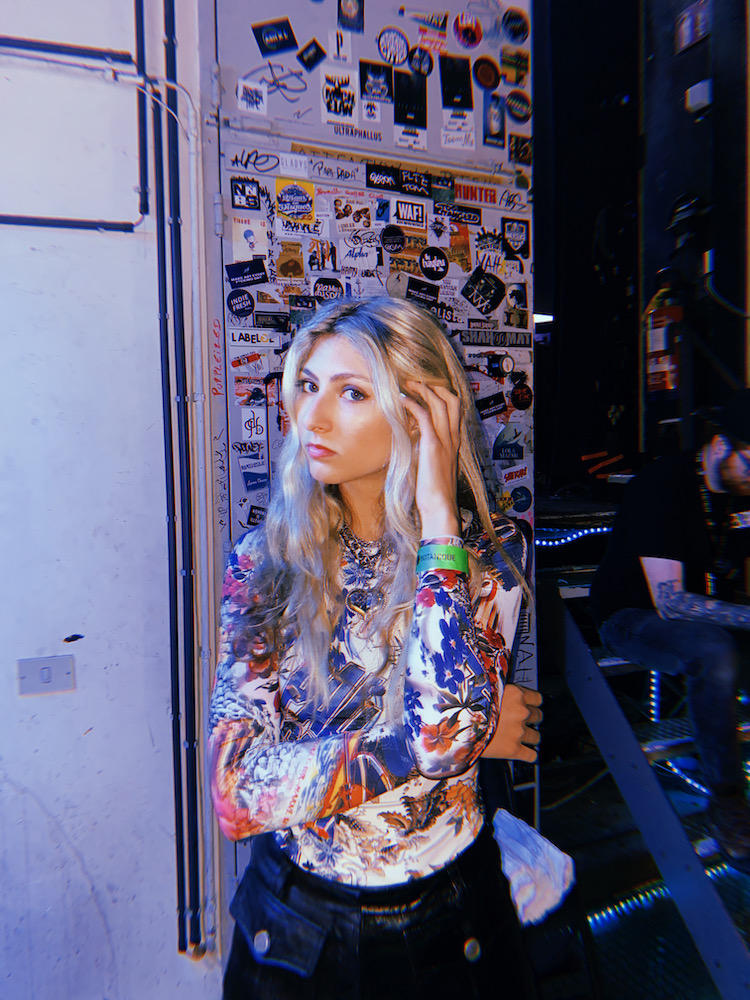 Do you have a tip for people who has a crush on someone on how to approach them?

I honestly think that being bold is the way to go! Not that I would personally do that but that is my advice. Often when someone is getting a vibe, the other person is feeling the same thing. It is very instinctual. And what is the worst thing that could happen? That it wouldn’t work out? Then there will be others!

And heartbreak is something good to write about, right?

Oh yeah, it is the best. It depends on the timeline. Sometimes it is hard to write about it because you remember it so vividly and other times it just comes out. I don’t mind writing about it. It works therapeutically when I channel these feelings.

You’re big on TikTok. How do you use that platform? Do you think it is easy to use?

Now, it is harder to break through because we’re with many. Therefore, it is difficult to be authentic. But I’m really grateful for the time when I started with TikTok. It was quiet in the beginning, and everyone was just figuring out how to use it. There wasn’t an example, and I think when you are copying the “examples”, there isn’t a guarantee that you will make it.

I see a lot of new artists on my ‘for you page’.

Yes, and many people are so good, but I kind of feel bad because I know how hard it is.

How do you discover new music?

I think TikTok for sure, but also ‘Discover Weekly’ on Spotify. The algorithm is so good! Sharing music with my friends is also something I do. Once you’re a musician in a community, people pop up. 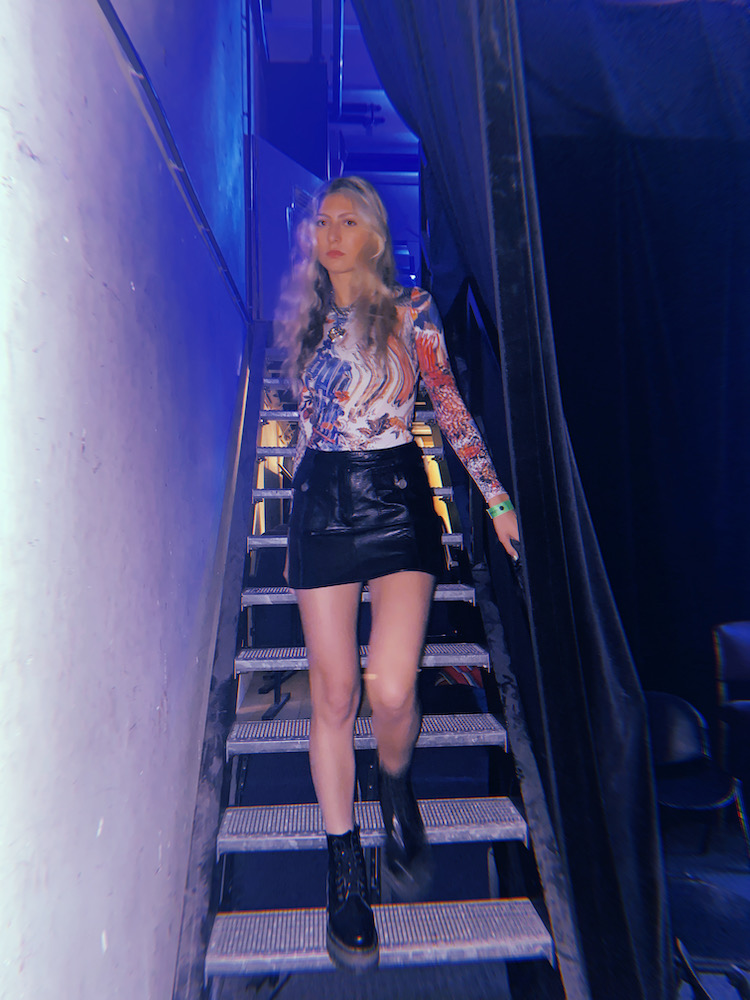 You already worked with other artists like UPSAHL. How is it to work with a different artist, is it something natural or strategic?

I think both. I have some songs with Chromeo coming out soon and that went natural. We liked hanging out and had such a good time. With Gayle and UPSAHL it was more like: we’re all fans of each other, let’s do this. I think it will always happen in different ways, but it was fun working with all of them!

Is there music coming out soon? And how do you approach the release?

I think my goal now is to release as much music as I can. I have so many songs that I’m afraid that if they’ll not come out now, they’ll never come out! (laughs) I want them all out there!

Do you test a lot of new music when you’re on stage?

Definitely! We are playing two new songs tonight. I love doing that. You sing the same popular songs repeatedly and then it is fun to add in some new ones. It makes me feel more creative.

What is the first thing you will do after the European tour?

I will get back to New York, and I will play at multiple festivals in the US. Afterwards, I will write some more music. But I’m already back in Europe in August for the festivals!

Pictures and interview by Maxim Meyer-Horn with the assistance of Romy Deridder.