COBRAH: “It Doesn’t Have To Be a Statement Being Who You Are”

Don’t let COBRAH’s thrilling songs fool you. Behind the facade of her techno-inspired club bangers, you can find an artist who’s exploring her mental health, queer identity, and the power of self-confidence through songwriting. The Stockholm-based singer has carefully prepared the release of her sophomore, self-titled EP for a while but the result was worth every second of waiting. In our exclusive interview, COBRAH opened up about making ‘COBRAH’ and discussed her progressive take on pop music.

Hypothetically, if you’d have to change your artist name to something new, what would it be and why?

That’s like the hardest question I’ve ever been asked. It took me a year to get COBRAH so that’s something. I think I would pick something that isn’t a classical name and would perhaps choose something like a thing or animal because I like the spirit of not being so stuck to being a person. It would never be Amanda, and it’s just cool to be a thing.

Anno 2021, there are more multi-disciplinary artists than ever. How have you discovered your passion for music?

I discovered that I know where I want to be in five years. So I knew that I wanted to be an artist when I was in high school. I went to songwriting schools to learn how to write songs, and afterward, I knew that I wanted to put my music out and that nobody was fully supporting it. I had to learn how to have a label and then I wanted something to wear on stage. I couldn’t afford to buy really cool gear and had to learn how to make things myself. That’s always been the case with everything because I had to teach myself about fashion and aesthetics, in general, to be able to do it myself. But also, I think the whole DIY is fun because it gives you the maximum control over what you do, and I’m all about being a control freak. 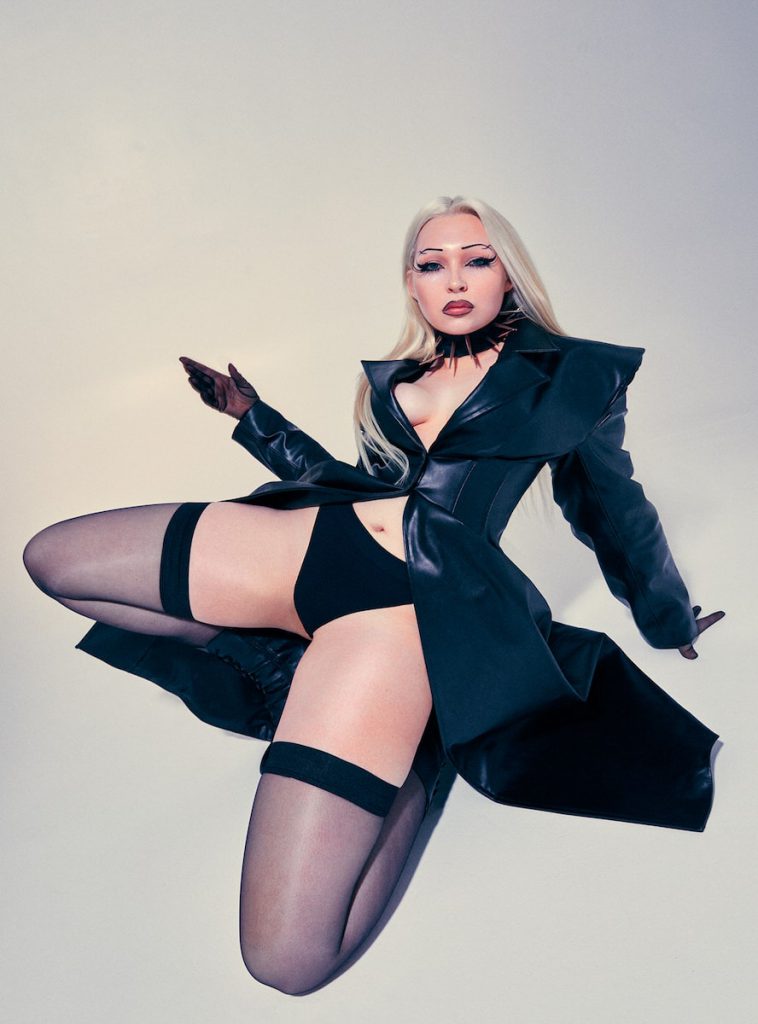 You’ve done musical theatre when you were younger. How did that help you become a performer?

You learn a lot about culture and the whole campy thing as well, but I also learned a lot about performing, dancing, and theatre. It gave me a very good set of beginner skills to kind of move forward. Before studying musical theatre, I just used to study music in general. When I was a kid, I went to a special school where there’s a lot more music than science and maths. I tried a lot of different stuff to kind of figure out what I wanted to do. So I started musical theatre and found out that that’s the thing I wanted to do. It helps me now when it comes to performing to know something about what I’m doing.

Your music has a metallic, industrial, and futuristic vibe. How do you try to translate that into your aesthetics?

We all live in a post-modern goth period, or at least I do, and there are a lot of artists that are that too like, for example, Lil Nas X, etc. There was this hardcore, emo-scene ten years ago, and it kind of died out and Kim Kardashian ruled the world. Now, she’s having a divorce and the whole e-girl is coming back. So I would describe my aesthetics as a modern, maybe a bit more queer, take on what I used to wear and used to be like when I was in high school. It’s a hardcore, emo, and goth kind of thing but just a bit more redefined and in an adult version.

We also got some Christina Aguilera vibes … from her Bionic era. Was she a reference?

Well, people keep saying that, but I didn’t think of Xtina when I did it. But I can see it now. I mean, Christina Aguilera is dope, so I’m taking that as a compliment. 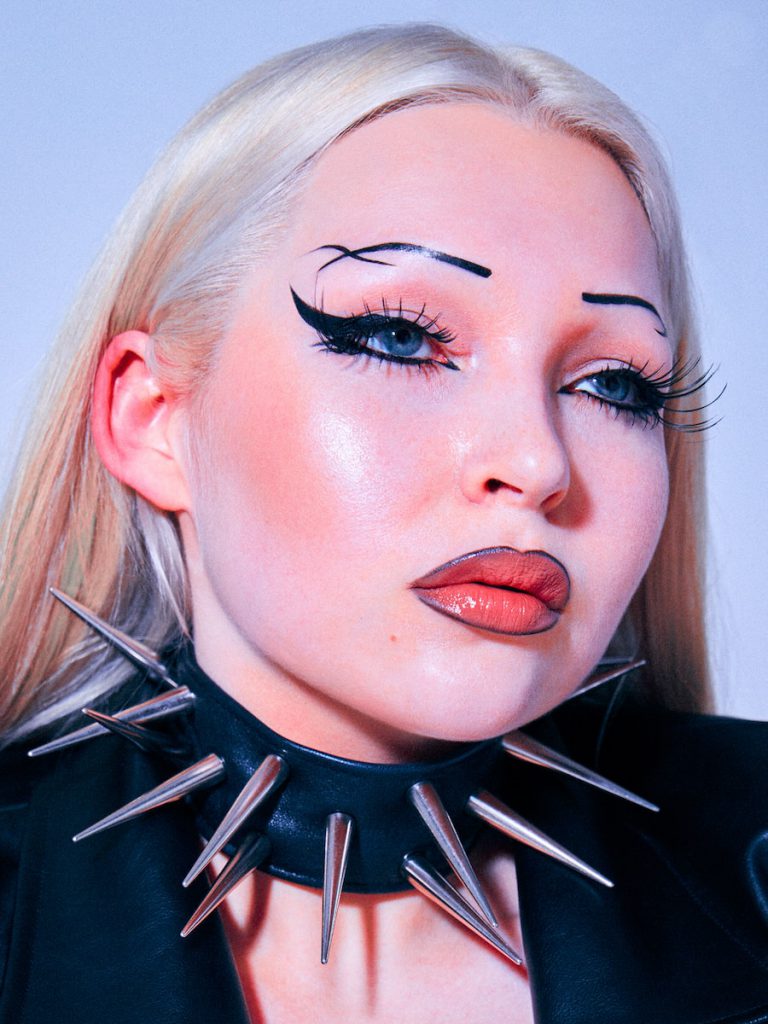 You’re working as an independent artist. Do you need that creative freedom to make what you make?

The honest truth is that I feel like the deals I got offered after the ICON EP were quite shit. I didn’t want to work with people that saw me for what I was doing at the moment but kind of see me for what I was about to do. I wanted them to collaborate with me on a more in-depth level, so I decided to not directly partner up with a label. I felt, like myself, I could do all the things they offered. The two biggest reasons are the creative freedom, and they were just shitty offers. (laughs)

However, “GOOD PUSS” is a real sex-positive anthem. Does being unapologetic in your songs help you gain confidence?

I would describe the genre of “GOOD PUSS” like ‘cunty’. It’s this thing where you talk about your pussy and genitals so that sexuality is a genre in itself. I think Peaches is the queen of doing that, so it’s definitely a sex-positive song. Somebody asked me recently if COBRAH was an alter ego or if it’s all me, but I think I’m me through COBRAH. It’s not something I separate.

I’ve always thought that confidence doesn’t come from within but from the outside in. Doing COBRAH is definitely a part of me acting it and taking it into my private self. It surely helps me a lot to have that safe space in the studio and expressing things. Especially because I’m a Swede and we have this mentality where you don’t see yourself better than any other. That’s a very internalized way of being, so it’s really nice to get out of that and be a place like in music where I’m better than others. Not really, of course, but I can kind of act on it in a way. 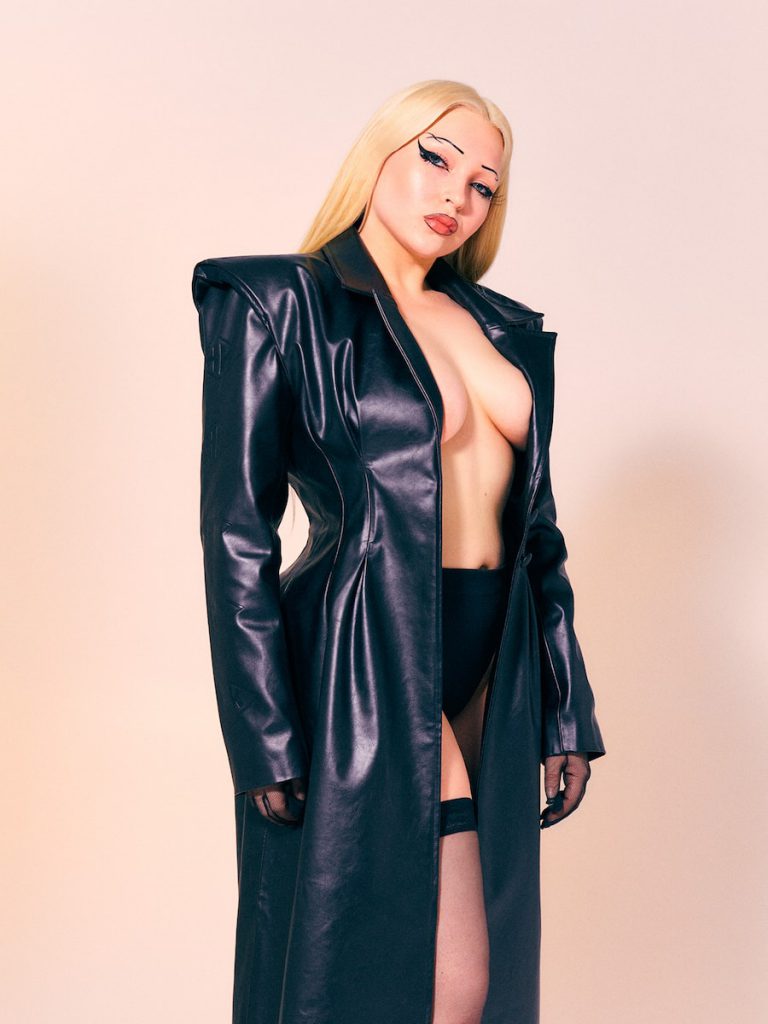 In your songs, you explore queer identity, mental health, and the power of self-confidence. Is there something specific you’ve learned while making your new EP COBRAH?

I learned that it’s okay to be a bit careless. I struggled with how important it has to be to not have a sincere message because the message is quite there. I learned that it doesn’t have to be a statement being who you are, or I don’t have to think about it as it being a huge statement. At least, what I want to convey with the EP is that it doesn’t really matter if you’re queer or who I sing these songs about. It’s the vibe, the self-indulgence, and the confidence.

All that is the true meaning, and I’ve learned that personally. It’s okay not to overthink your sexuality or make it a big statement but just live and roll with it. You can be loud and proud, but it shouldn’t be that big of a deal. I hope that my music doesn’t really turn heads just because I sometimes sing about girls. I just don’t know how relevant it is anymore or how much of a shock it is to be queer. I think we should get over that and just accept that people sing about people.

Where will you take the COBRAH era now that the EP is out?

It’s hard at the moment because you usually tour your new EP or album. And now, for me too, I’m wondering what I will do, but I’m in the studio working on my debut album so that’s what’s happening. I’m also working on a new music video. My EP comes out and I have a shoot day right after. Some weeks later, during the summer, the music video will come out. Since I won’t be able to tour next summer, I’ll take the time to write songs for the album and then we’ll see what’s going to happen. Since there aren’t a lot of options of things to do, I’m fully taking this time to make new music.

‘COBRAH’ is out now on all platforms!