COVER STORY: Inti Takes Power of Her Own Decisions

We go through many transitions in our lives, and we have to make decisions every day. Some are big, and some are small. Our new digital cover star Inti—known for participating in Spain’s first season of ‘Drag Race’—has been going through some major changes in the past few years. These changes are what inspired photographer Matías Batallé to shoot our new cover story. The drag performer is an absolute fashion darling, gracing our latest digital cover like a true goddess.

You’re part of the ballroom scene. How has this scene shaped you as a person?

It was a total gift because, as a queer kid of color, I didn’t grow up with representation. At some point, it felt like the world was against me. When I got into the ballroom scene, it was a relief. It was destiny.

You’re originally from Bolivia, lived in Antwerp (Belgium), and are based in Madrid (Spain). What is the influence of these cultures on your drag?

I would say that Bolivia gave me the art, Spain the character, and Antwerp the fashion. 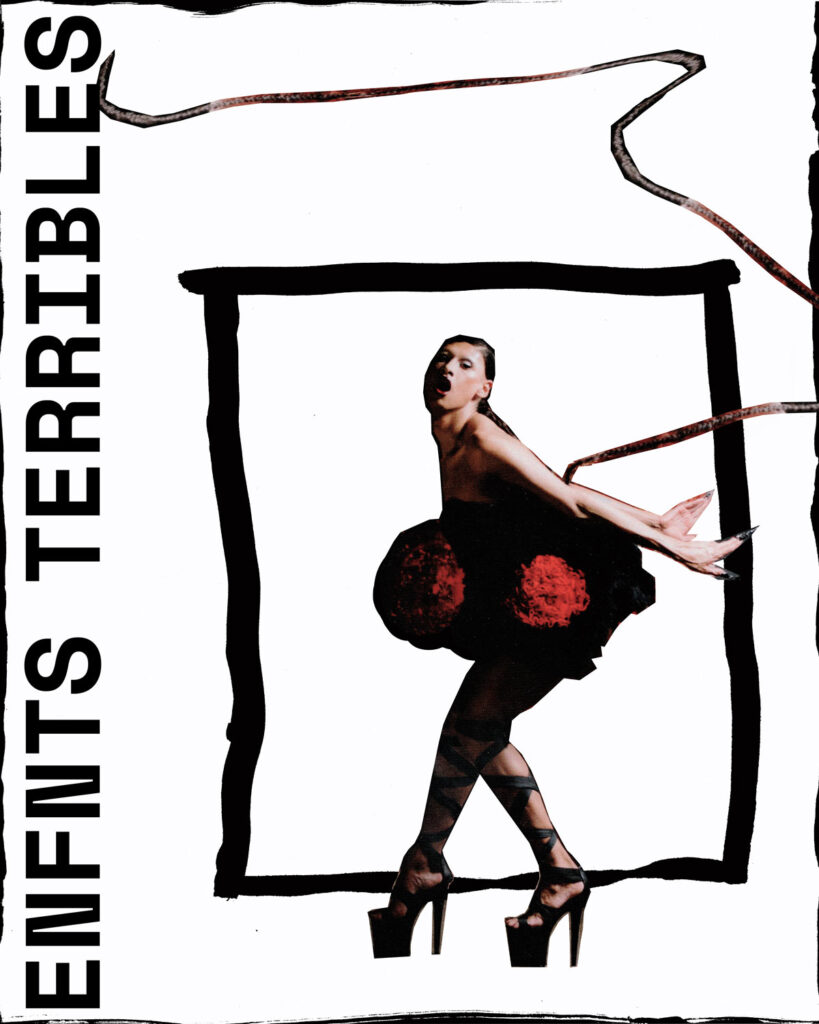 You participated in Spain’s first season of Drag Race and decided to leave after a couple of episodes because you felt the judges didn’t appreciate you. How do you look back on this experience?

I understand why I felt that way because it was such a strong feeling. I don’t regret it, and I wouldn’t change it; I feel that bigger things are coming. I feel very lucky to have had this experience with my nine sisters, and I’m very grateful to meet all these nice people thanks to the show. You have very positive and very negative things, but as I always say, “Let’s focus on the more positive things because there are already so many negative things.”

You said you enjoyed being around your nine sisters. How is the sisterhood now? How do you support or encourage each other?

The most important thing for me is creating a community because if we don’t have that, we’re fucked up. We cannot run this world alone, and we need to support each other. As a queer person and as a person of color, I was very lucky to have someone like Pupi Poisson because she also thinks the same. We have so many people against us: just because we are ourselves. Why would we be mean to one other? Even if we have a very different personality, background, or type of art, we are in this together. We shared this experience, and only we know what happened. It’s a little traumatic, but it’s also what keeps us together. 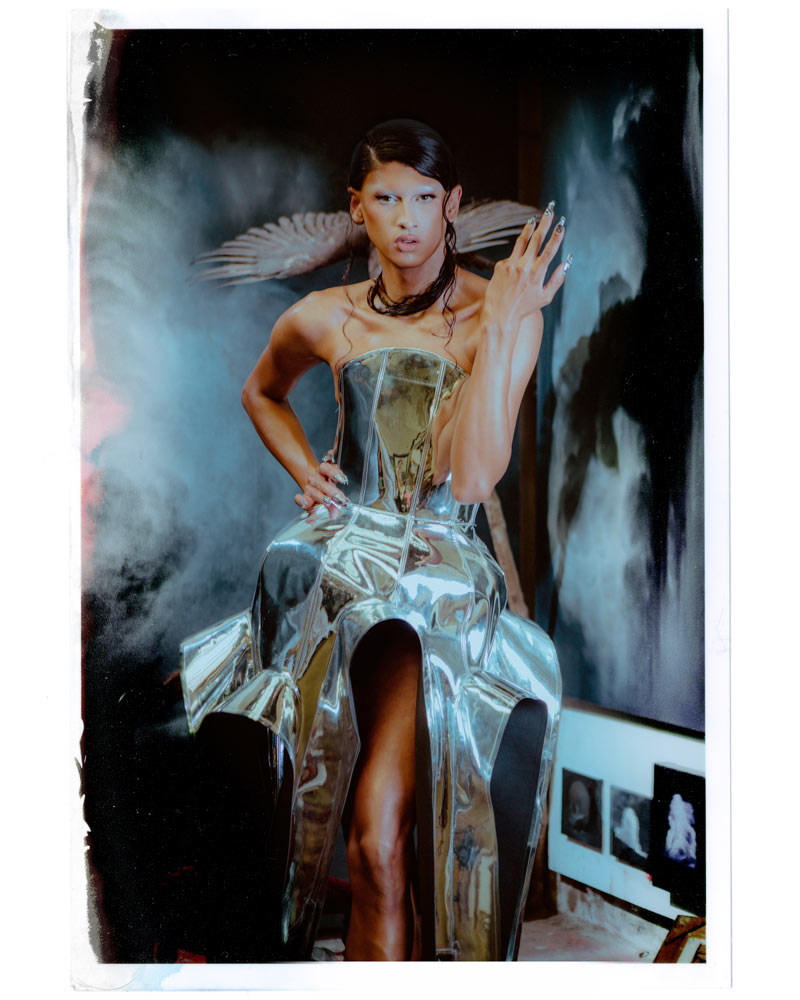 Being on a TV show exposes you to a large audience. Was it frightening to open up about personal topics knowing that cameras were rolling?

No, it’s not like you’re in a theater and looking at a thousand people at the same time. When you film a show, you’re in front of a camera with just one person. I always wanted to be myself because I just get angry or sad sometimes; I didn’t want to fake anything or create a persona that is not me. If I felt something at that moment, I had to say it or do it. Of course, I don’t want to cross a boundary and hurt someone, but if I don’t hurt anyone, I have to do it or say it. When I decided to leave the show, it was like an explosion of emotions because I was so stressed. One thing I didn’t expect is that you can touch people with your words and actions. When I was talking about my dysphoria, I didn’t know that it could help so many people. That’s amazing.

You made some powerful statements about being trans during the show. Was it a relief for you to open up about your emotions or was it rather scary?

It was scary cause the majority of people don’t know what non-binary is and it was actually the first time it was mentioned on a Spanish competition tv show. By the way, If I’m trans, non-binary or feel more femme, I shouldn’t have to say it or need to come out of the closet. Straight people don’t have to explain themselves to anyone either, so why do we need to do that all the time.

Do you feel like you are an example for people because you’re so open about yourself?

I don’t think about that, and I’m very scared of that, to be honest. I’m not a good example to anyone. I’m human; I make mistakes and try to learn from them. I don’t want people to put me on a pedestal because I have days where it’s going to be easy to pull me off of it. If I can be a good example, I’ll take it and I’ll always do my best. I always try to bring a positive message to the table, but that doesn’t mean that I’m telling you that you have to do something. I’m more like, “If you can like it or can take it, that’s perfect because I take advice in my life too, and it helped me out sometimes.” 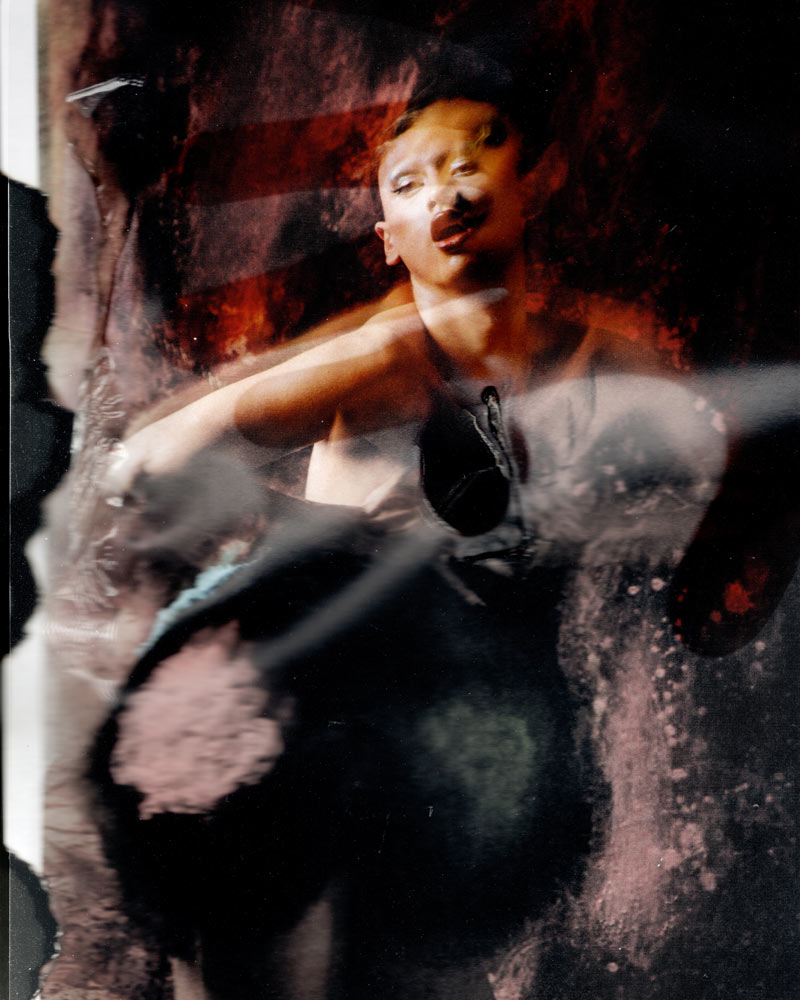 What does our digital cover story shot by Matías Batallé embody for you?

That’s a good question because he gave me a mood board, and I loved it. For me, it’s about embracing feminity, soul, fearless and a metamorphosis.

Matías Batallé told us that he wanted to highlight transitions and the power in taking them by changing or distorting the original pictures by hand. Do you think that concept reflects something about your personal life as well?

You’re an absolute fashion darling. What are you looking for in a look?

Just like everyone else, I’m very emotional and want to translate these emotions into my looks. It sounds materialistic or stupid, but it isn’t for me. Fashion is art. When I see textures, colors, or messages behind it, it can make me crazy in a good way. I always focus on the message and its composition. It’s nice to have materials that don’t make sense at first glance and somehow make it make sense when you bring them together. I try to be colorful even though I don’t always succeed in that.

How would you define your signature style? Is there something that always comes back?

I always need a corset to create a waist. I also love the color red. I don’t even know why I love it so much, but I just like it and tend to go for something red when I can. 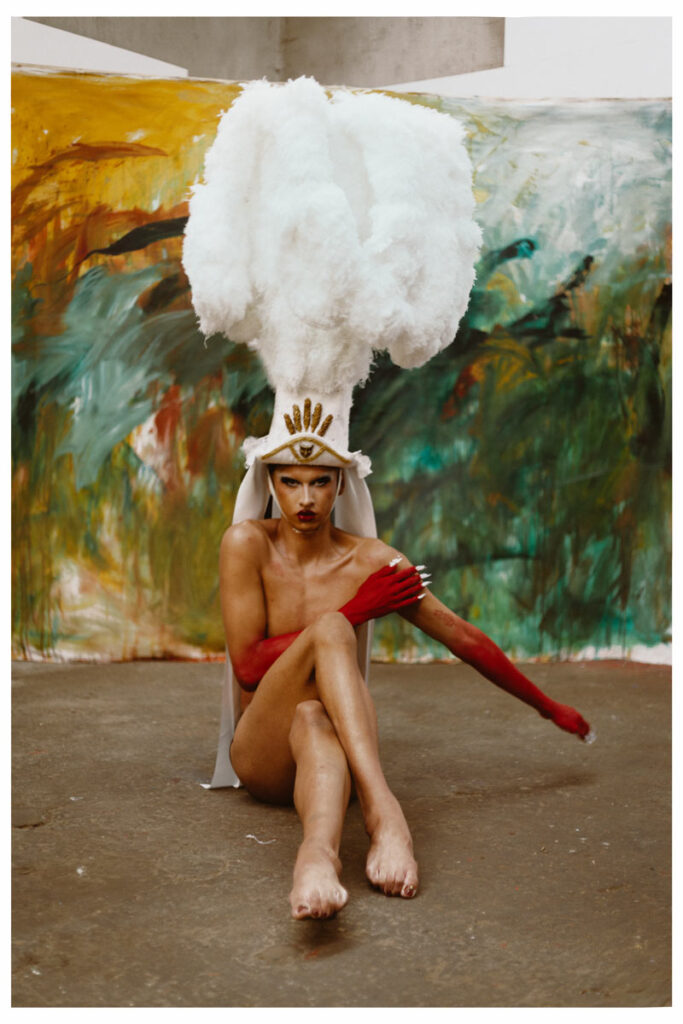 For many people, red presents power, passion, and love. Could that be the reason you love that color so much?

I know the meaning of the color and think that’s probably why I like it that much. As an indigenous person, I always thought I wasn’t good enough, and somehow wearing red makes me feel like a superhero. It’s an empowering color.

This year, everything that I had in mind—or that I was working on last year—will see the light. The merchandise is finally coming out at my website iaminti.com you can support me in buying my merch!
“Q’iwa” also would see the light soo. The fans of Drag Race really asked for it, and if they’re asking for it, I’m doing it. I’ll do anything for my little “soles” (editor’s note: Inti refers to her fans as soles). 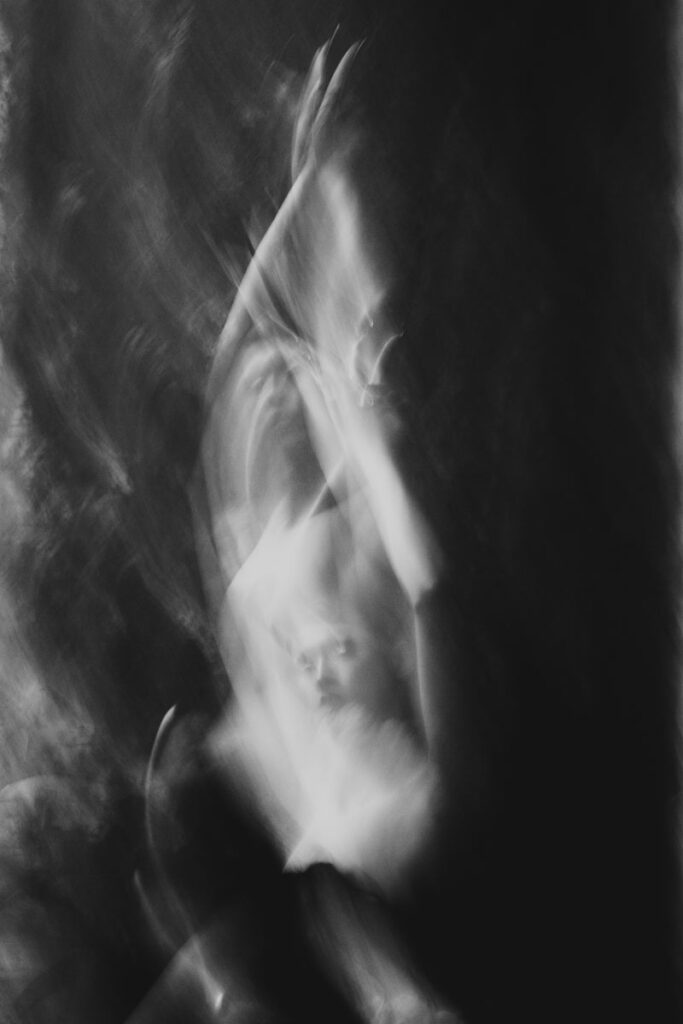 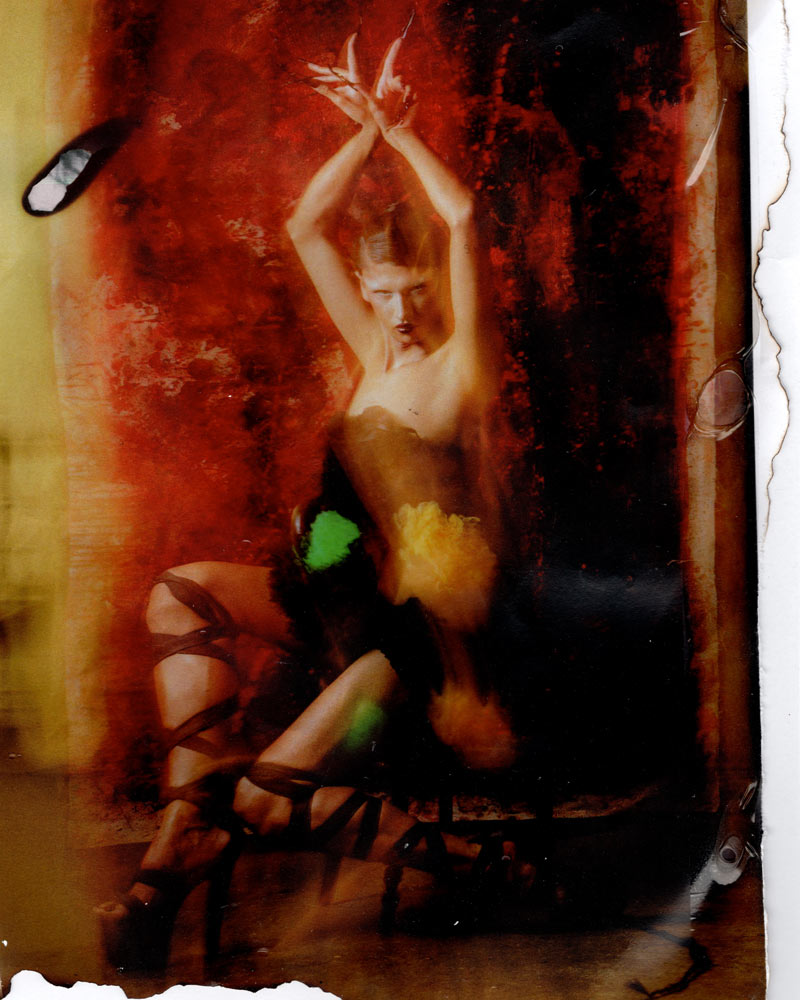 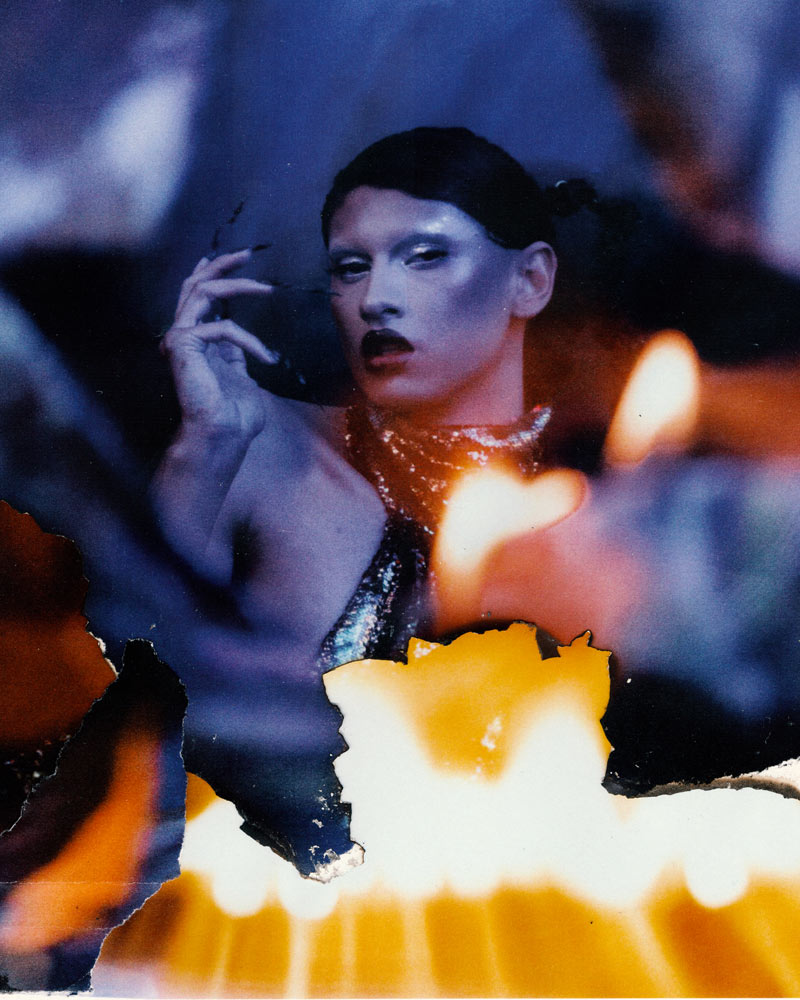 Special thanks to Adrian Iurco for letting us shoot in his inspiring work place! 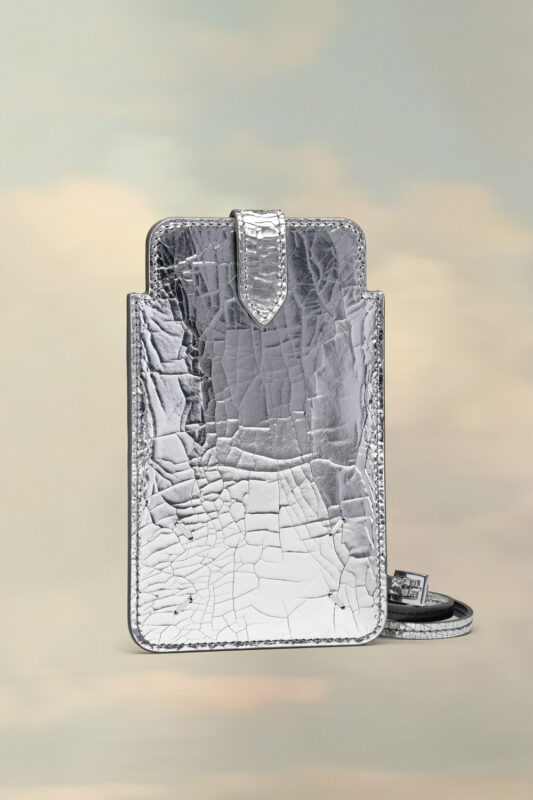 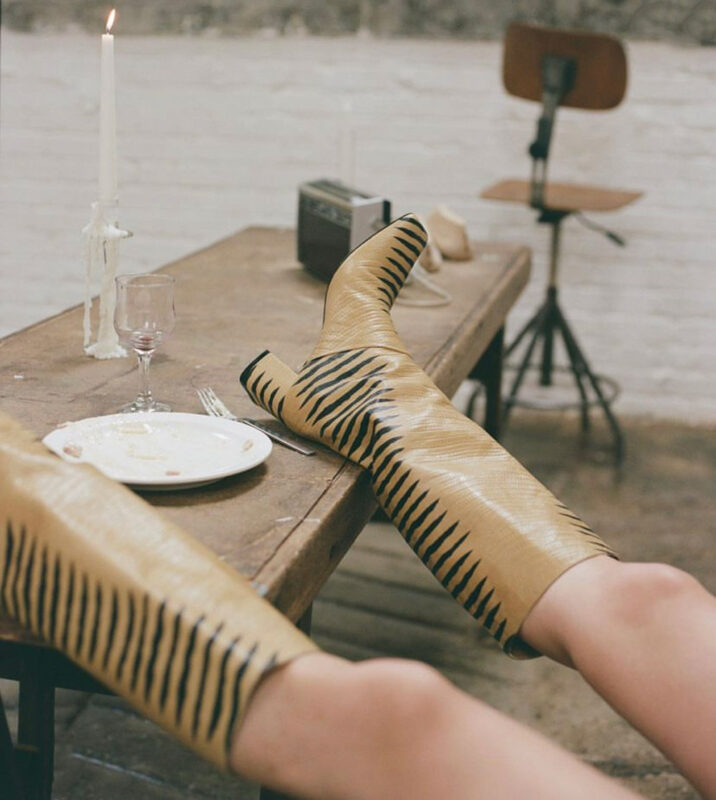 Our 10 Favorite Boots of the Season You can’t imagine how relieved we are to see temperatures dropping. Finally, we can put our summer wardrobe back where… 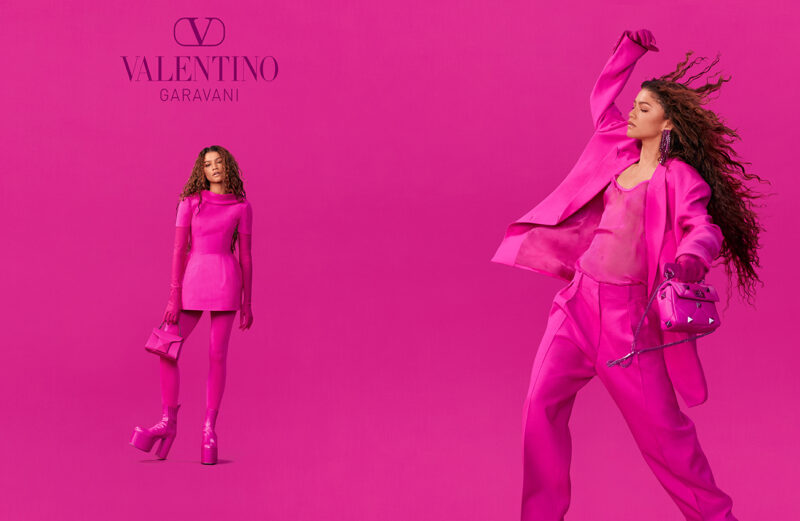 WATCH: Zendaya Stars in Valentino’s New Pink PP Advertising Campaign Just one day after Zendaya’s win at the Emmys on (and off) the red carpet, Valentino released its new ad… 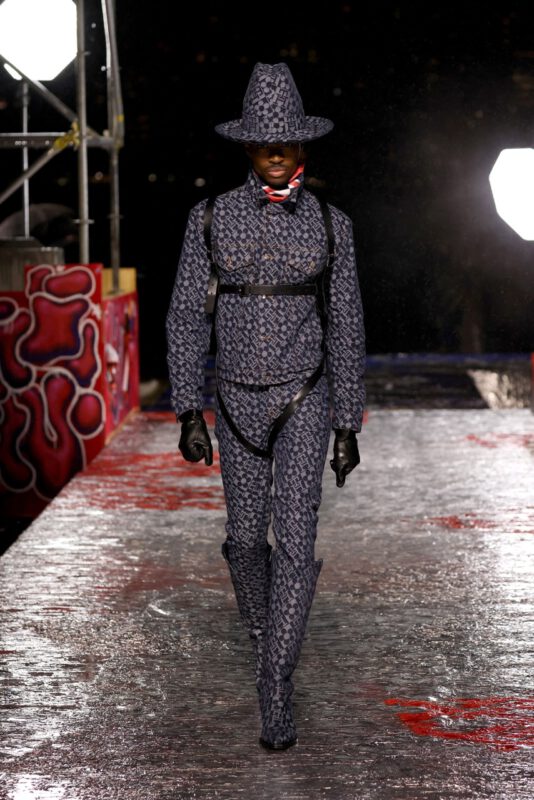