Crystal Murray: “I Feel Like Paris Has a Lot of Cultures That the Media Doesn’t Show”

At the age of only twenty years, the Parisian Crystal Murray has already established herself as a true frontrunner in the artistic scene of the French capital. She’s dictating the trends—not only musically but also artistically—and belongs to the most celebrated upcoming artists. On her new project ‘Twisted Bases’, Murray takes matters into her own hands and underlines her versatility as a creative. We had a chat with her about the new album, being a creative in Paris, and her identity as a performer.

You are very creative on different levels and started very early with fashion and music. Do you think that our generation of young creatives is more a DIY type? Or why do you think that you started so early?

I feel like our generation is taking a step forward in the artistic scene. I think it’s probably because of social media. We know way more than before. And we are more aware than ever. They make people into doctors or something else that’s needed in the world. But we want to have our own schools, our own way of learning. You don’t want to be dictated what to learn. So, I feel that my generation is getting interested in doing it themselves.

I think we don’t care about age. It’s not a problem. There are no boundaries anymore, which is super interesting to see. I started in the fashion world when I was 12-13 years old, and it was funny because the top was like, “Oh, you’re 13, and you’re doing all these things!” But for me, it was normal. It came so naturally. It wasn’t normal to know what you want at a young age. Now I’m twenty, and I do plenty of stuff that I love. And I’m happy where I am artistically and workwise. 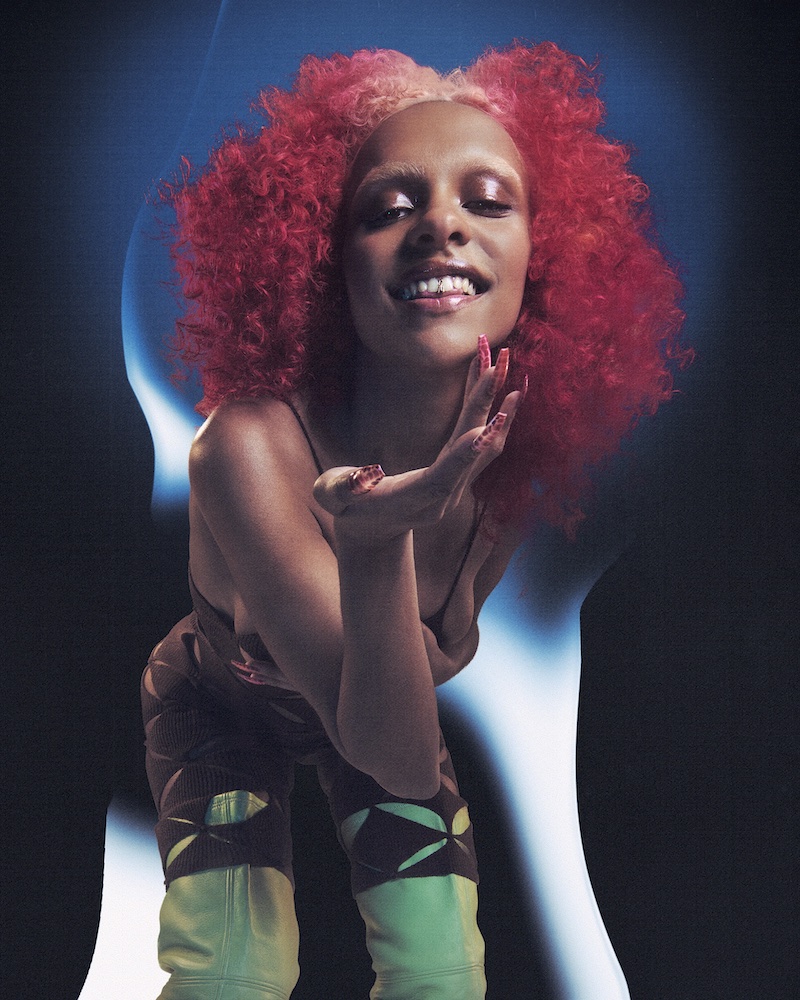 We’ve read that you started your label Spin Desire. What’s the idea behind the label? How would you describe its identity?

Yeah, I created my label, where I signed Thee Dian, who is one of my best friends. It is not a big label, but it is still kind of big, in a way. It was important for me because I signed early at the age of 16. And I slightly felt trapped. If you don’t know what you want to do, people are going to tell you what you want to do. So, I felt super insecure, and the label was not going well, and then I started to know what I wanted to do. Then everything worked out because when you want to sell your music, the best way is to sell what is in your heart. It needs to be super rough—super real. That moment unlocked my head. I had a good relationship with the label, but I had this feeling of “Ok, I’m a musician. What can I do to get an even more artistic mind?”

I was having this feeling of “Yes, I can make it on my own, but would it not be great to make it with some other people?” Like to make it with a group. To make it with energy. To make another way of thinking. To make a new sound. So, I decided to create this label not because I wanted to be famous. I don’t want to be like: “Oh, that’s the singer.” I want to be, “This whole part of Paris is insane!” We make this new sound, and it’s not just the person. It’s like the whole energy behind it. Now we throw occasional parties. Sometimes we throw a DJ set where I host and invite a bunch of other DJs and lots of different MCs. Zydian is this incredible girl who’s writing her music. She’s so talented, and her sound is digital but in the old-school way, which is so good. It gives me energy! That’s why I created the label. To leave a legacy. Even when I’m young, it’s just important to me.

As you’re still very young and work in a very hectic scene, do you often think that you are underrated for your skills and that people underestimate what you can do? Or do you feel that you are already appreciated for what you do at your age?

I don’t know. I feel that people always saw me as mature. I don’t want to say I’m insecure, but when you’re a musician, you can’t go, “Oh my God, this is fucking great!” And especially when you’re young. It kind of takes the essence away of just growing all the time. So, the album is out, and I’m happy because it is the first step to another step. It’s not like, “Oh my God, you guys are going to freak out!” I’m like, “You guys are going to freak out in a couple of years.” I’m grateful for what I’ve been doing, and I’m happy that I’m listening to myself artistically, visual- and sound-wise for the last two years. So, everything that will come out is straight from the heart, and I think you can feel it. With the first EP, I was still kind of in a box—still looking for what I wanted to do. But I was only 16. It makes sense, but I’m happy that I had the chance to grow with my music, grow in something I love, and grow in the right way. 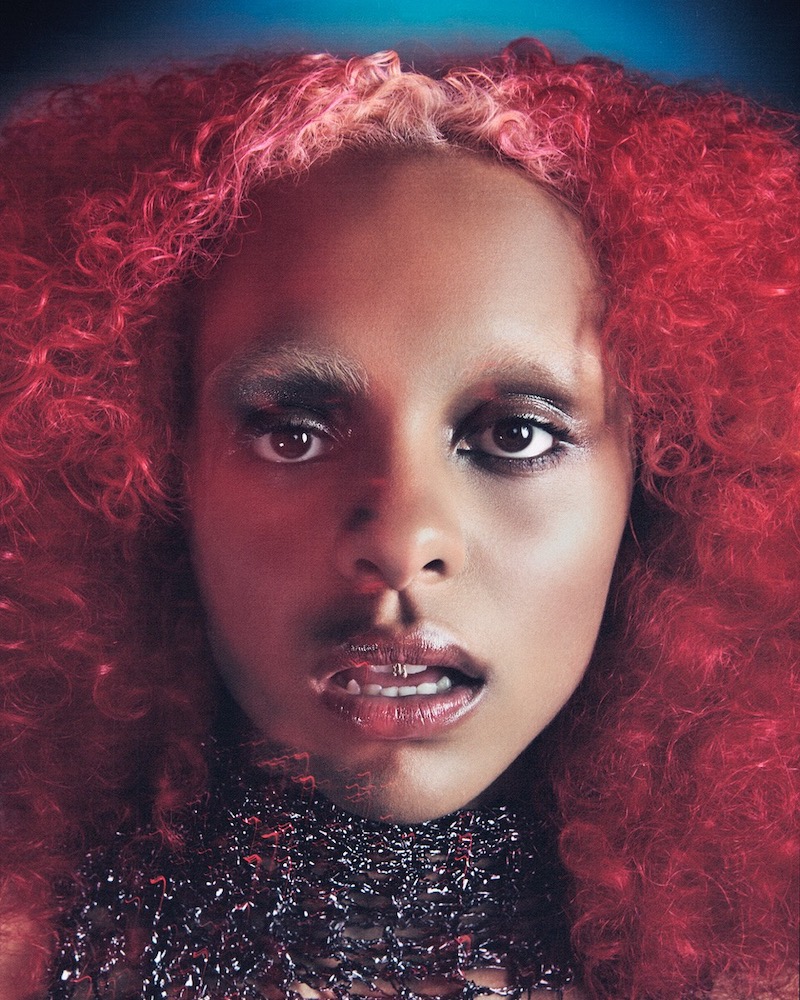 When the first EP came out, it was what came out of me at that moment in my life. So, it was soul music because the soul is what I know and what I grew up with. So basically, I did not think about it; it came out very naturally. It’s cool because when I did it, I was feeling the people even if I didn’t think about them during the project. The people still liked it. It kind of confirmed me in a way; okay, this is what you’re doing. So, for the second EP, I was already tired of neo-soul music. I love the beauty of the voice, but I don’t like putting my voice in a box just for people to like it.

I started to use my voice as an instrument. And it was something that could be destroyed and put back in place, you know? What happened on the project is that I didn’t want to follow the beat. I wanted the beat to follow me. My favorite side is the last five songs. They fit my energy lately, which is fast, slow, little voice, high voice … I’m happy with this project, even with the visuals. I started working with my stylist Stephy Galvani, and this year she became my artistic director as well. We worked on the visuals together. Since we are together, we are breaking rules—like boundaries. Everything that I ever wanted to show on the screen is happening now!

You are based in Paris, which is a very exciting city, especially in fashion. How do you think that Paris is reflected in the project?

Paris is very versatile in a way. You can have super posh clubs, and you can go to another place that is a hip-hop club. We have a nice club culture. Even if the media doesn’t show them in Paris, it is just not the same. All my friends are like fucking incredible. I think it inspired me because I’m half American, but I do not feel connected to the States at all. But here, I feel connected party-wise, mindful-wise, artistically. I feel like Paris has a lot of cultures that the media doesn’t show. But I think we’re cool! I think we have something rough and raw. You don’t know me, but I’m like a real Persian girl, in a way. And I love the city so much, and I love the culture, and I love everybody. I’m always inspired.

Where do you get the confidence to get on stage? Because it takes a lot of nerve to stand in front of people and sing your songs. Is there something specific that gives you the power or energy to stand on stage?

I think it comes naturally. I like to talk and dance. I’m okay with shows and singing in front of people. So that helps. But there’s always a person behind it, you know? When you are an artist, you have a role now and then. You’re not always happy. That role is still me, but the better version. She’s way sexier and cooler and more social than me. 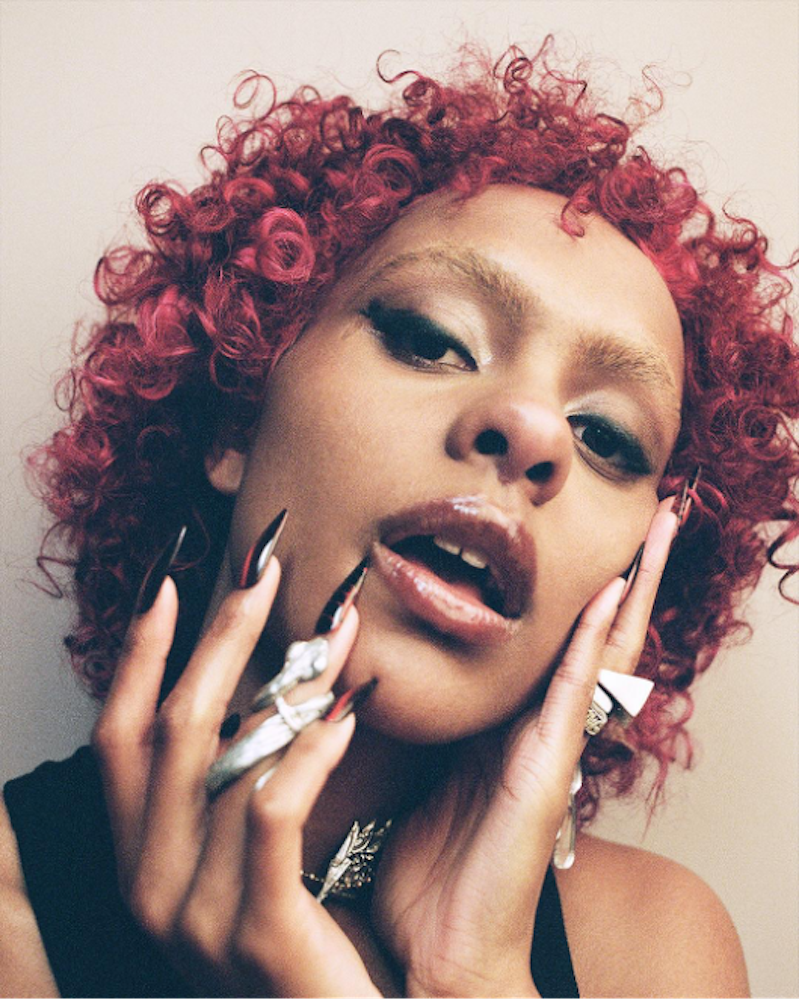 Is there something specific you want people to know before listening to your new project?

The EP is a lot, so I think that people need to make their own stories.

‘Twisted Bases’ is out on all platforms. Crystal Murray will perform on May 4th in Brussels. 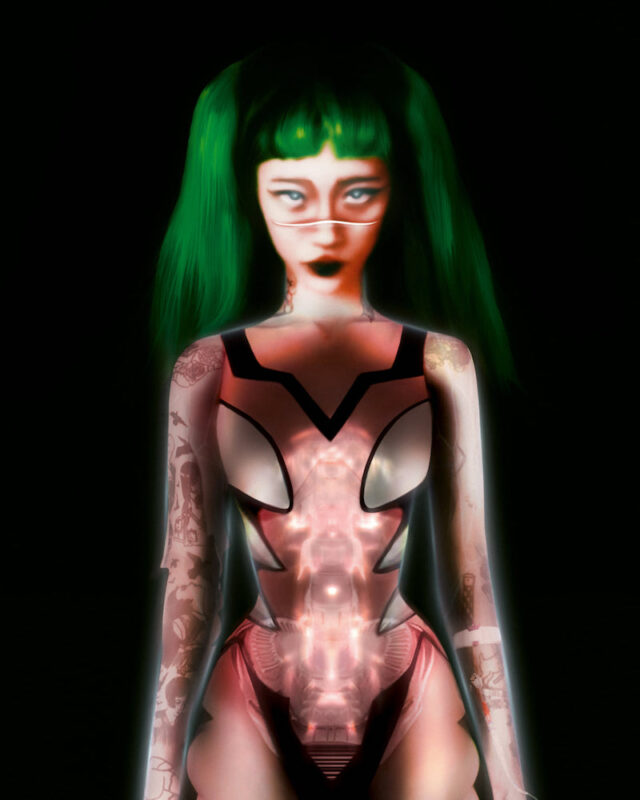 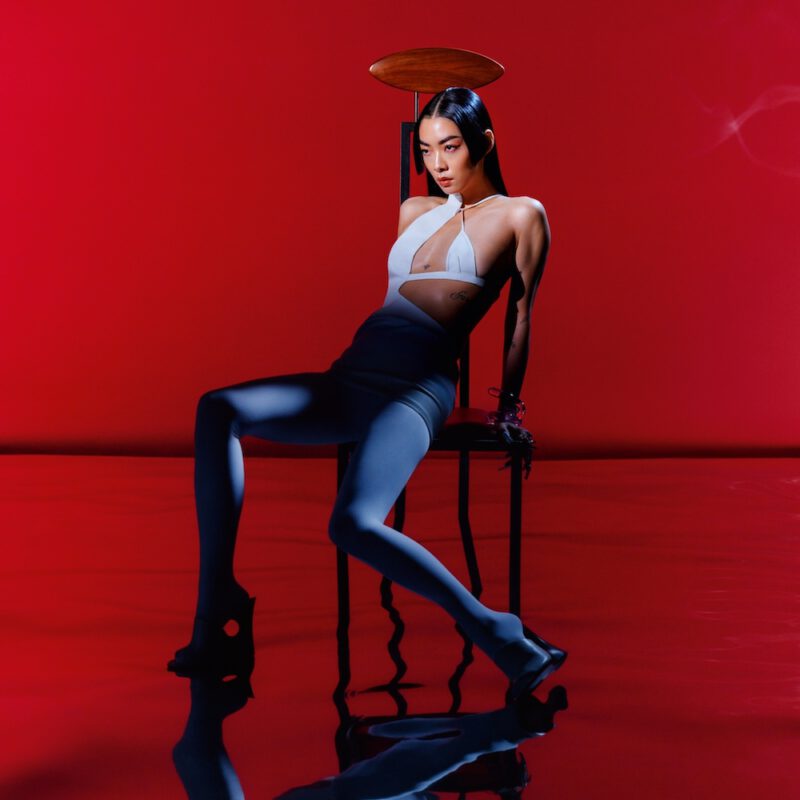 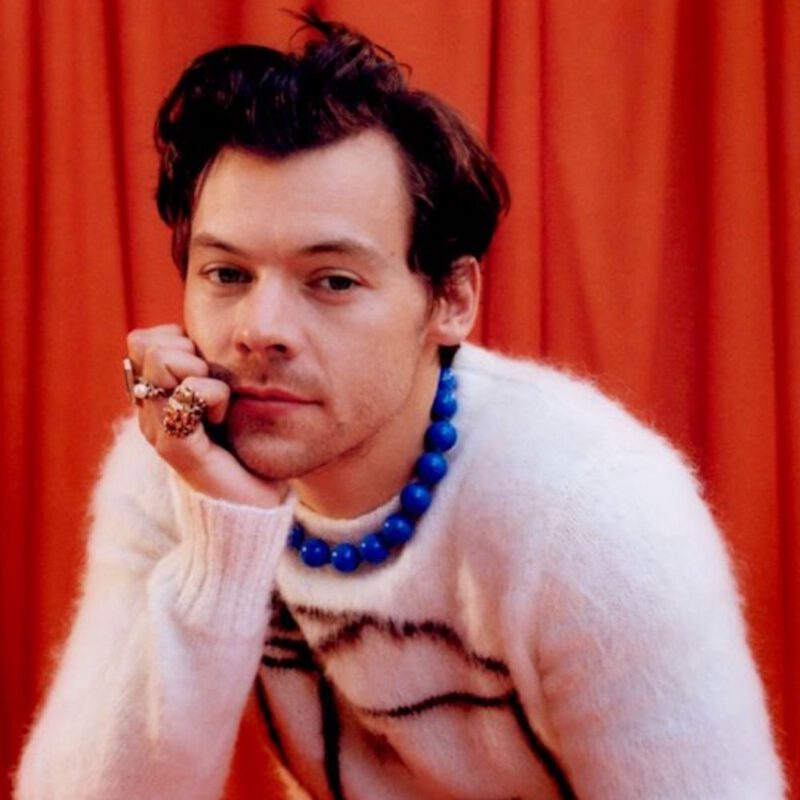 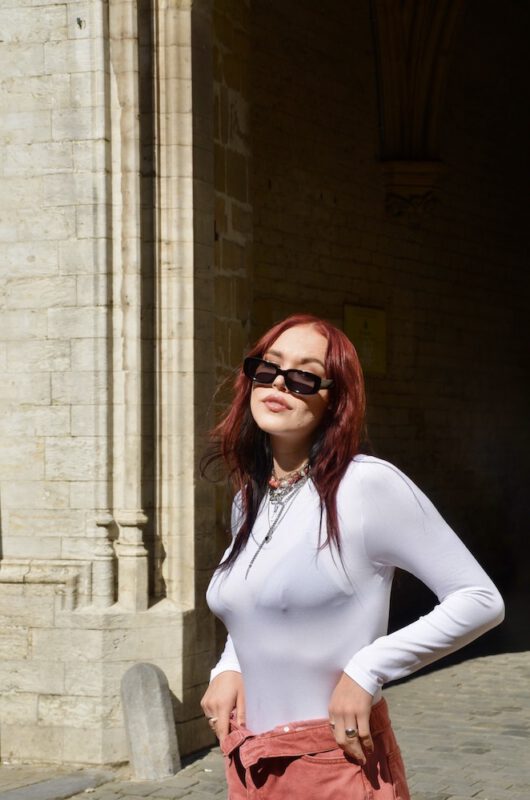