Are you ready to meet the new darling of the British music scene? We definitely were when we caught up with Barny Fletcher at the Pukkelpop Festival, where he played his first ever Belgian show. The young rapper has a similar flow like Anderson .Paak and gets you hyped within seconds, which makes him a big contender to become a global superstar. We interviewed him before the big buzz around his persona will take off.

Your mixtape CANVAS2033 celebrates its third anniversary today and showcases your amazing flow. How did you discover your flow?

Honestly, I don’t really know. I never really thought I was a rapper, because I grew up listening to The Beatles and other bands, but later on I started listening to rap. I loved Eminem, but apart from that I’m not really keen on other white rappers. I found out that I could write some raps and it sounded good without being cringy. I think that’s the way the mixtape came together. I wrote a lot of songs last year and for the mixtape I chose the songs that fitted best together. As a new artist, I wanted to come in very energetic, especially since a new artist mostly performs in the mid-day or afternoon slots at festivals.

What else did you want to show the world with your first project?

That’s a good question! I just wanted to have fun with it, because I sing as well and didn’t expect to make a rap mixtape. But it happened and I’m really happy with it. The next things that are coming are different musically and are more accessible. The show at the moment is very much in your face, but that will develop in the coming months when I release new music. With my first mixtape, I wanted to come in with a bang because there are so many new artists around.

How do you start writing a song?

Usually, it starts in the studio with a producer who has some beats ready. We mess around with it and I’ll write some stuff on it or we just build a song from scratch and do it that way. For example, we sample a funny video we found on YouTube and turn it into a base. I don’t specifically have a method and it just happens. Lyric-wise, I write everything on my own because it’s easier for me.

Instead of just bringing a DJ, you perform with a three-piece live band. What’s the biggest advantage in bringing a live band on stage?

The energy on stage is way more fun and it feels more musical having a live band behind you who are actually playing the instruments and samples, so it feels more legit. I can get anyone to just press play, but that’s just too obvious. There might be some shows where we’ll do that, but for this run of festivals, I wanted it to be a fun show with great dynamics. It’s fun having a band, because you aren’t alone and have some people around.

You looked extremely confident on stage, even though it was only your 10th performance ever. How did you prepare for the festivals?

We did like a week and a bit of rehearsals to put the whole mixtape into a show. Our musical director is that guy called William Bowerman (the drummer of Dua Lipa) and we worked really closely with him. We started off at smaller festivals and it’s been really crazy. For the first run of festivals, it has been pretty insane. 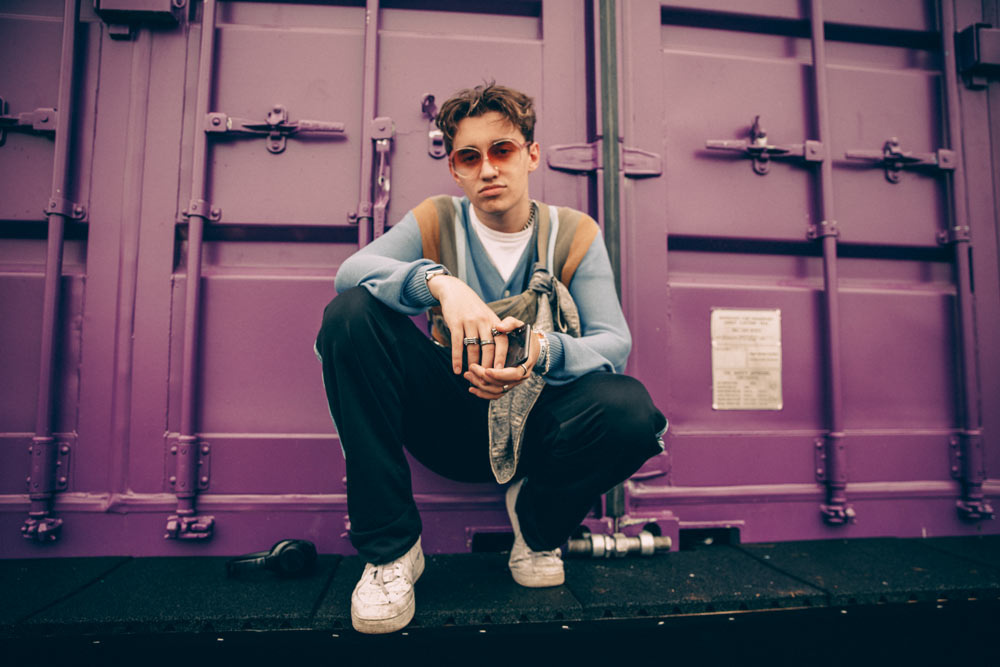 You always have very cool fits. Where do you get your inspiration?

I don’t really know. I think I get it where most people find it. Instagram, people on the street, … a bit of everywhere. Today, I’m wearing some second hand stuff, but also some new pieces. It’s really a mix of a little bit of everything.

There are some big names like Dua Lipa that already love your music. How do they support you?

I’ve only met Dua once properly, but she and her family run the Sunny Hill Festival in Kosovo. They had me on there playing at a really good spot and I had loads of fun. The whole Lipa family is so dope. Further, we have DJ Shadow who produced my track “Found It”. He’s legendary in the hip hop-DJ world, so working with him was a dream come true, and of course my producer Karma Kid. He was a very important person in the making of the mixtape and there are so many others as well. It’s just so cool to see the person behind the artist and feel that they support you in different ways.

When can we expect new music from you?

In a couple of months. Let’s say two or three months. It’s going to be a mixtape, but it will have more ‘songs’. The first mixtape was very upbeat, but for the second one I have some slower stuff. I really want to showcase the other side of my artistry and reach more people with it.

We’re anxious to hear the result! Enjoy the festival and the bands performing.