Interview: Meduza Reveals The Magic Behind Their Big Hits

The Grammy-nominated trio Meduza was on its way to immortal fame with their giant hits “Piece Of Your Heart” and “Lose Control” but the coronavirus threw a spanner in the works. Instead of touring the world, the new holy trinity of deep house has to stay home and uses their time to work on new music. Producer Mattia Vitale Meduza made some time for us before a studio session to discuss the magic behind the project and what we can expect from Meduza in the coming months.

Meduza is a project of three artists. How do you divide the work?

Basically, we have three different backgrounds. I’m more the DJ, and Simon and Luca are more the musicians. Luca has his focus on the machine, Simon is the melody-guy of the group, and I’m more the guy of arrangements and the general idea. The funny thing is that when we’re in the studio, there are no particular roots in the process. We’re all free in sharing our ideas and give our opinions about what we like and don’t like. Whenever we find a solution that the three of us like, we go ahead with it and start working on the track.

What’s the biggest advantage of being a trio in the studio?

It’s a big advantage because it allows you to share your opinions with someone that thinks differently. You have more points of view instead of working on a track on your own. You can think that you created a perfect track, but you realize it’s not like that when you have feedback. It always gives you a different view of what you’re making. 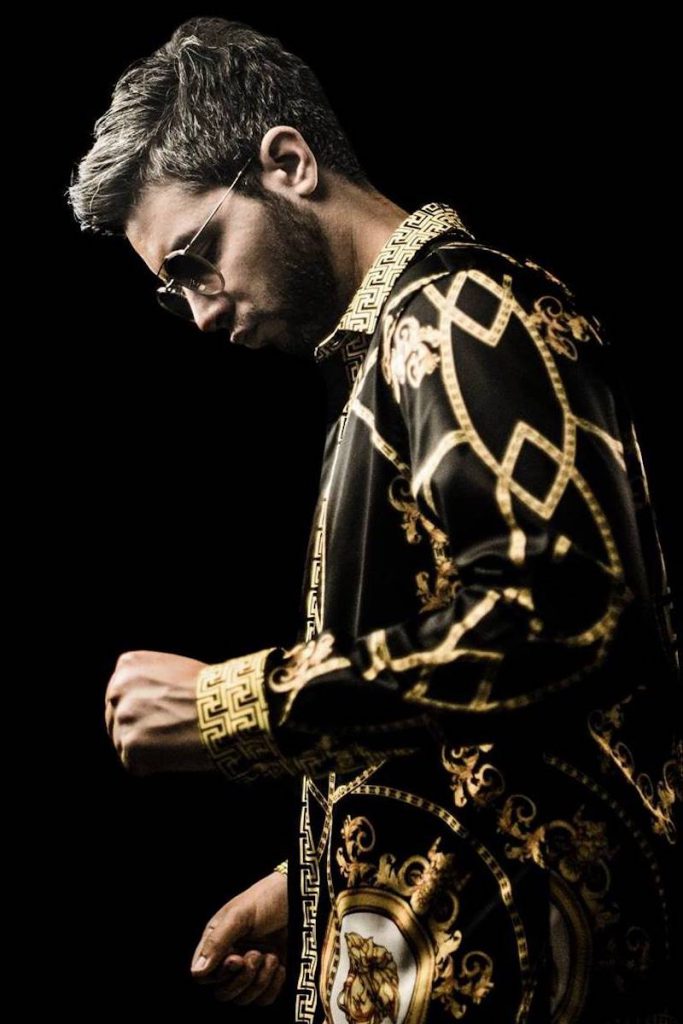 Meduza is super successful with over a billion streams. What’s the key to the success of this project?

I don’t know if there’s a secret behind our success but I’ll explain it to you. In the early ’00s, we grew up with house music on the radio from artists like Eric Prydz. Then, EDM came, and the beats became harder and harder, which was a bit too hard for daytime radio. We wanted to bring back the sound where people can dance in the club and is music people sing along with in the car during the day. I guess that’s probably the key to our success. You can enjoy a track of us: not only in a club when they play it but also play it through the day.

Your most recent single “Paradise” is on its way to becoming your next big hit. What was the main idea of the song when you created it?

We came back from New York with the last flight right before the lockdown, and we finally had time to go to the studio. We’ve been on tour for two years, and it wasn’t really to make new music. That’s also why we didn’t release a lot of music after “Lose Control”.

We decided to write a song about the distance that corona created between us and friends, family, loved ones, or even places. We remixed “Power Over Me” for Dermot, and we immediately thought his voice fits perfectly to our sound. Luckily, we’re under the same label in the UK, so it wasn’t super hard to get him on board. He loved the idea of the track, and we recorded everything in just one day. He’s really talented.

How do you think that the music video complements the message of the song?

There’s no particular link between the song and the music video. Our visuals were always more about the location, and that’s the same for our live streams now. We want to tell a story with our streams. You can listen to a song and have a different feeling about it based on the place you’re listening to it. We wanted to share that with our audience and try to create a different kind of mood for our songs. We try to share a moment with others that give them a new view of our music.

The pandemic forced the industry to get a little bit more creative. What do you think will change in the next years?

It will be a weird time because people probably want to party twice as hard as they did before. They probably won’t miss any chance to party. If you want to go to a festival like Tomorrowland or EDC, you won’t wait for a whole year but take the chance to do everything you can. A lot of people want to live the whole experience without waiting for another year, so people will automatically enjoy the moments more. We don’t know what happens next, and we’ll probably have this kind of fear that will make us experience parties differently or more intense.

Meduza loves strong voices like Becky Hill and Dermot Kennedy. What do you look for in a singer to collaborate?

We always try to get a special feeling from the voice we choose. We need to be inspired first and need to be sure that we get, for example, goosebumps when we hear a voice. And it’s very important to us that people will feel the same as we do. If a voice creates an emotion in us, that’s the first step for us to create something different and new. We look for a special sense of magic or emotion.