Kelsy Karter: “I’ve Never Liked to Sexualize or Exploit Myself for Success”

Kelsy Karter is a real trailblazer and is finally starting to receive the recognition she deserves. The Los Angeles-based singer became one of the most interesting rockstars of the pop industry and is ready to unveil her most ambitious project yet, her highly anticipated debut album. We had an exclusive chat with the new ‘enfant terrible’ in music and had the chance to dig a little deeper into her artistry.

Your music is a combination of anthemic rock with pop elements. Would you consider yourself a rocky pop star or a poppy rock star?

Talking about rockstars, you seem to be a big fan of the legendary Mick Jagger. Why is he one of your greatest idols?

I didn’t really discover rock stars like Mick Jagger, David Bowie, or Freddie Mercury until I was a teenager and there was something that kind of liberated me through that. I learned how to sing from jazz music and soul, but Mick Jagger made me realize that I wanted to become a performer and not just a singer. There’s really something about him because he’s 77 and still out there performing and out-partying everyone. We’re both a Leo, so we have that in common as well.

Was there a specific moment or event that made you realize that you might have what it takes?

It’s funny because when I was a kid, I didn’t think of becoming a singer. I didn’t rule it out but I was more interested in acting and theater. I wanted to be an actor and director and wanted to be in a circus. Singing wasn’t necessarily my main focus because I was actually quite shy.

My dad always stood next to the door and listened to me singing when I was showering. He told me that I should focus on being a singer and was the first to support me with it. When more people heard me sing, they said that my voice had a nice tone, but I didn’t know what that really meant back than. I kept singing and finally admitted to myself that I was good at it, so I never stopped and continued to do it. 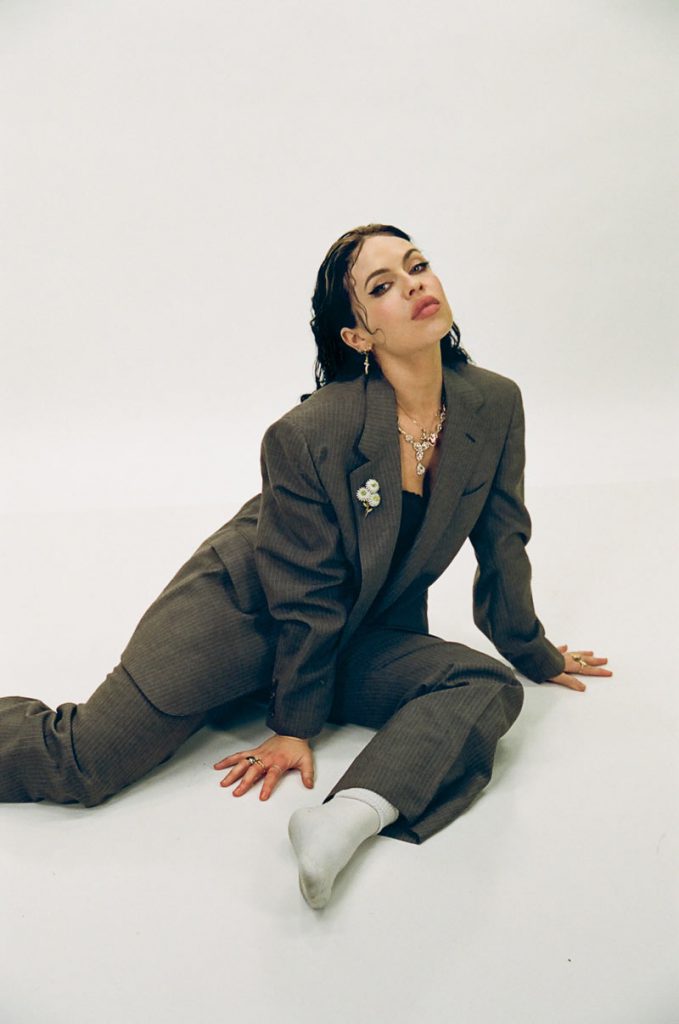 Genres are truly fading away and the music industry has changed a lot in recent years. What do you think about the evolution in music and the growing freedom in experimenting?

A big battle for me was that I grew up listening to older music and the influences I had weren’t artists like Britney Spears. I loved James Brown, David Bowie, and Elvis, so there was a time when I was growing up where I felt wrong for loving those people and being influenced by them because everyone around me wasn’t. I thought I had to transform and fit into this pop-music mode, so I listened to people that thought they knew better.

I was also young and naïve. So the fact is genres have become some sort of a distant memory in a way: it doesn’t determine your success because you don’t have to pick just one genre. It’s perfect for me because I’ve never been just one and had jazz and soul influences. Now, I’m doing rock music and never felt more comfortable with my own voice and myself in general. I couldn’t love it any more than I do.

You were an independent artist for a long time but decided to sign with a label. How important was that independency for you and why did you decide to eventually sign a record deal?

I have a reputation of being a real go-getter. I don’t like hearing the word no or can’t because I’m the kind of person that figures out how to do it. Being independent was a lecture in so many ways ’cause I was my own boss, and I really liked playing that role, but it was also nice for me to have control and freedom over my creativity. Then there was the financial struggle of being an independent artist, and I was fully funding my own music the whole time.

When I signed with the record label BMG, they signed me for my vision. I didn’t have any obstacles yet to convince them of my visions and I’m just continuing what I was doing before. The only difference is that I don’t need to pay for it anymore. I was definitely open to sign a record deal but it had to be the right one. I didn’t want to completely change who I was and I’m so happy they give me the space to be myself. 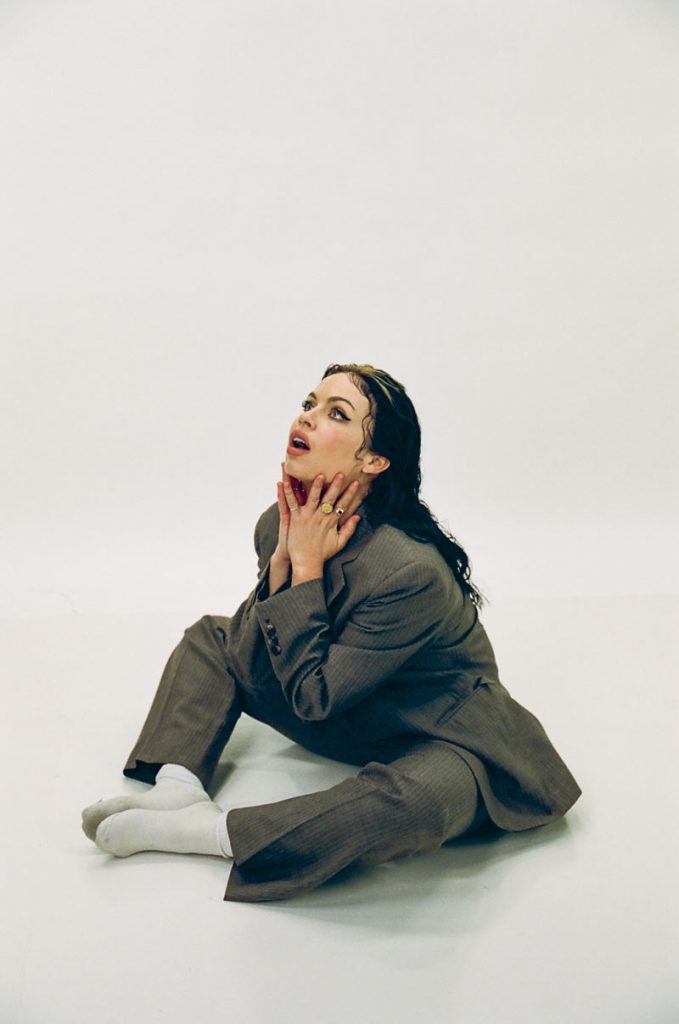 Your newest single “Stick To Your Guns” is such an addictive song. What moved you to write this song?

I had a pretty big publicity stunt last year with the Harry Styles tattoo on my face, which went viral around the world. When I agreed to do that, it was a no-brainer for me. I guess because I always was a little bit rebellious when I grew up. The idea of doing that was just another prank to me, and it was very exciting and out of the box.

After we did that, there was kind of a perception within my team that I was down to do anything for success. That’s actually quite the contrary because I’ve always been a tomboy. I’ve never been someone that liked to sexualize or exploit myself for success. Respect and longevity mean the world to me. The tattoo was just a cheeky prank, but I would never do something that’s out of character for me.

We had a meeting and suggestions were being made about the next step we’d take, but the suggestions felt very out of character for me. I felt very uncomfortable and thought that these people didn’t really know me, and I felt a little bit violated. I went home and told my family about it and they told me: “You’ve always stuck to your guns and just do that again!” The next day, I went to the studio and wrote this song about the feeling that you’re misunderstood and you’re told to do something for success, and I was basically like “Fuck that!”

On Instagram, you teased that the album will have a visual character as well. What are the plans?

You might have noticed it from my video but the visual aspect of everything is my favorite part. I always wanted to be a director and an actress, so it’s very cool that I get to live that dream now thanks to my music. I pitched the concept to my label with all the restrictions and guidelines surrounding the coronavirus in my head and asked them if they could arrange this amount of people and days to create this many things. I did a brief treatment for every video, they approved it, and they let me create for a whole week.

I ended up making so much content, so many videos and visual stories that will go with the songs. It loosely turned into a visual album because there’s a video for every song and it’s so exciting for me. I wouldn’t be able to do this without my label that embraced it and allowed me to create. The album is a collection of stories over a period of time where I went through depression, being broke, heartbreak, and just the uncertainty of time. It’s about all that and rising out of it, so the visuals help me unveil my stories.

Is there a big difference for you between working on singles and a full album?

No, because I’m always creating music, no matter what the goal is, without thinking that I’m creating it for a specific album or EP. It’s just going into the studio and telling your story. What’s cool is that the second I let go and stopped trying to write a smash or a hit, and just tried writing something vulnerable or something real to me, that’s when the album started to come together. It’s authentic. Every story that I’m telling on the album is an actual story that happened to me.

When we were picking songs for the album, it was like you could tell that these songs are from the same person and the same time. I write so many songs and you can’t put them all on the album. You have to pick the best ones. The album isn’t just a bunch of songs — they make sense together.

When can we expect the album or a new single?

You’ll get another song and the announcement of the album in a few weeks. The album is coming in the next couple of months, but I can’t tell you more…