10 Books To Read This Summer

Searching for the perfect book for those hot summer days? Look no further! We picked out ten books perfect for spending a day at the beach, from Young Adult novels to Psychological Thrillers. This list has it all!

The Crazy Rich Asians author Kevin Kwan has returned with a new book. To say we’re excited is an understatement. The romantic comedy follows Lucie Churchill as she lays eyes on the Asian George Zao on her first morning on the island of Capri. She instantly can’t stand him.

Lucie is the daughter of an American-born Chinese mother and blue-blooded New York father. She has always sublimated the Asian side of herself in favor of her white side and denies her feelings for George. Fast forward several years later and George unexpectedly appears in East Hampton where Lucie is weekending with her new fiancé. She finds herself drawn to George again, and before you know it, Lucie is spinning a web of deceit. Sex and Vanity is a funny comedy with a modern love story and is peppered with extravagant fashion and decadent food. 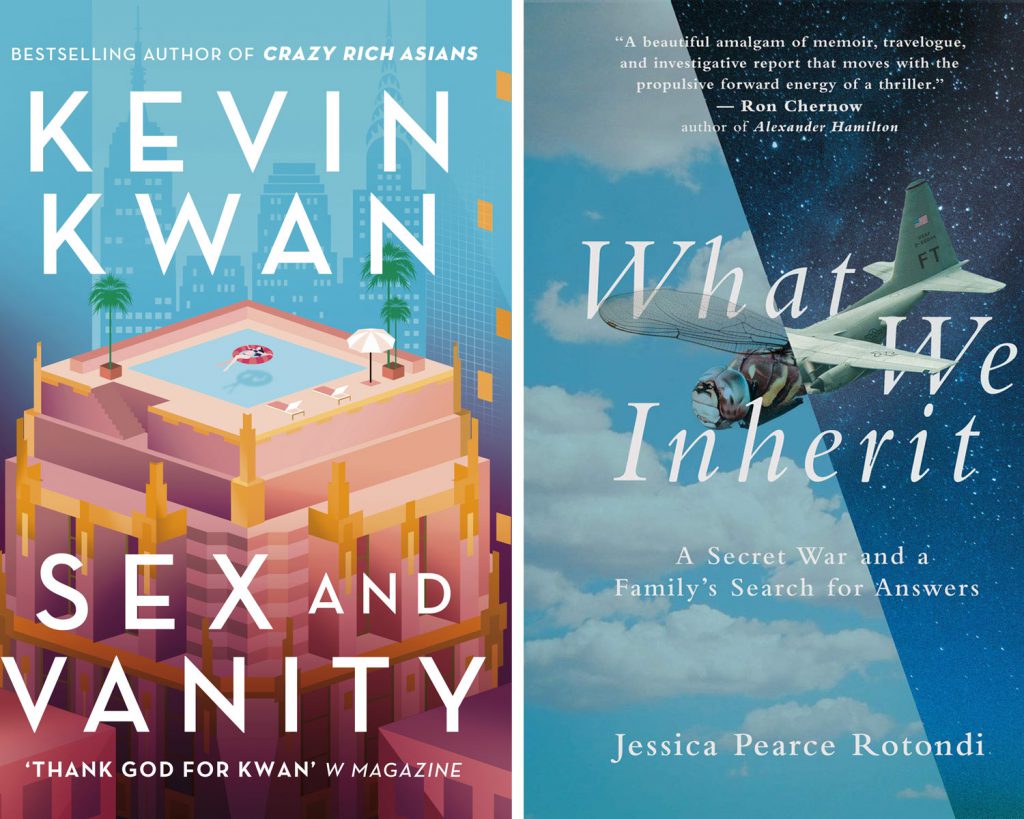 2. What We Inherit: A Secret War and a Family’s Search for Answers — Jessica Pearce Rotondi (Non-fiction)

What We Inherit is a non-fiction book written by Jessica Pearce Rotondi. In the wake of the death of Jessica’s mother, she uncovers boxes of letters, declassified CIA reports, and newspaper clippings that bring a family ghost to light: her uncle Jack, who disappeared during the CIA-led Secret War in Laos in 1972.

In 1943, 19-year-old Edwin Pearce jumps from a burning B-17 bomber over Germany. He goes missing in action for months, and his parents learn he is a prisoner of war in Stalag 17. Eventually, Ed returns home. His oldest son Edwin “Jack”, follows his father into the Air Force. On the night of March 92, 1972, Jack’s plane vanishes. Ed goes on a search for his son through Southeast Asia. What we Inherit is Jessica’s story of her own hunt for answers as she retraces her grandfather’s steps.

Alice enters the magazine world, where editors and writers resign on the spot because they refuse to work for the woman who wrote the scandalous bestseller Sex and the Single Girl. Eventually, someone tries to pull Alice into a scheme to sabotage her boss. But Alice remains loyal and becomes all the more determined to help Helen succeed. Park Avenue Summer is an empowering book that shows that a woman can demand to have it all. 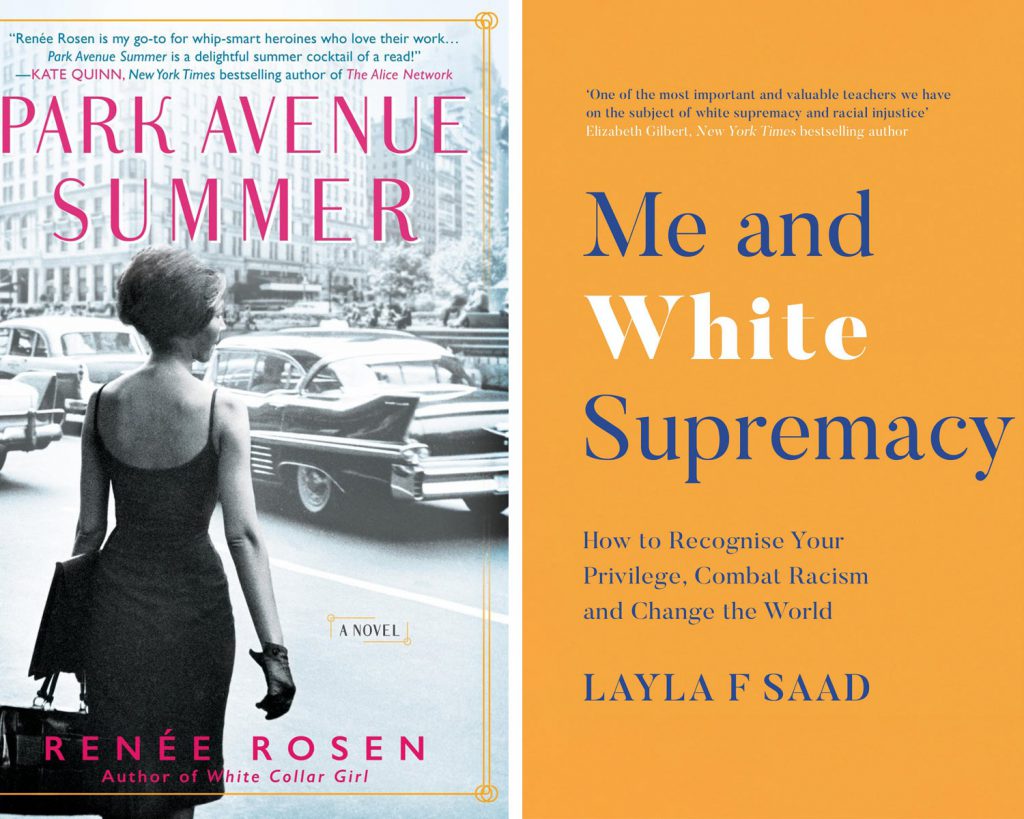 Me and White Supremacy: A 28-Day Challenge to Combat Racism, Change the World, and Become a Good Ancestor by Layla Saad leads readers through a journey of understanding their white privilege and participation in white supremacy. So that they can stop inflicting damage on black, indigenous, and people of color and in turn help other white people to do better. The workbook also includes historical and cultural contexts, stories, anecdotes, definitions, examples, and resources. A must-have for anyone who wants to learn more about their privilege, acknowledge it, and be a better ally.

The Selection written by Kiera Cass has been talked about a lot on the popular app TikTok. For thirty-five girls, the Selection is the chance of a lifetime. It’s the perfect opportunity to escape the life laid out for them since birth. They will live in a palace and compete for the heart of the gorgeous Prince Maxon. For America Singer, being Selected is a nightmare. It means turning her back on her secret love with Aspen, who is a caste below her. America doesn’t want the crown, nor does she want to live in a palace that is constantly threatened by violent rebel attacks. But then America meets Prince Maxon. She starts to question the plans she has made for herself and realizes that she might want something different.

Variety exclusively reported that Netflix will adapt The Selection. A release date is yet to be announced. 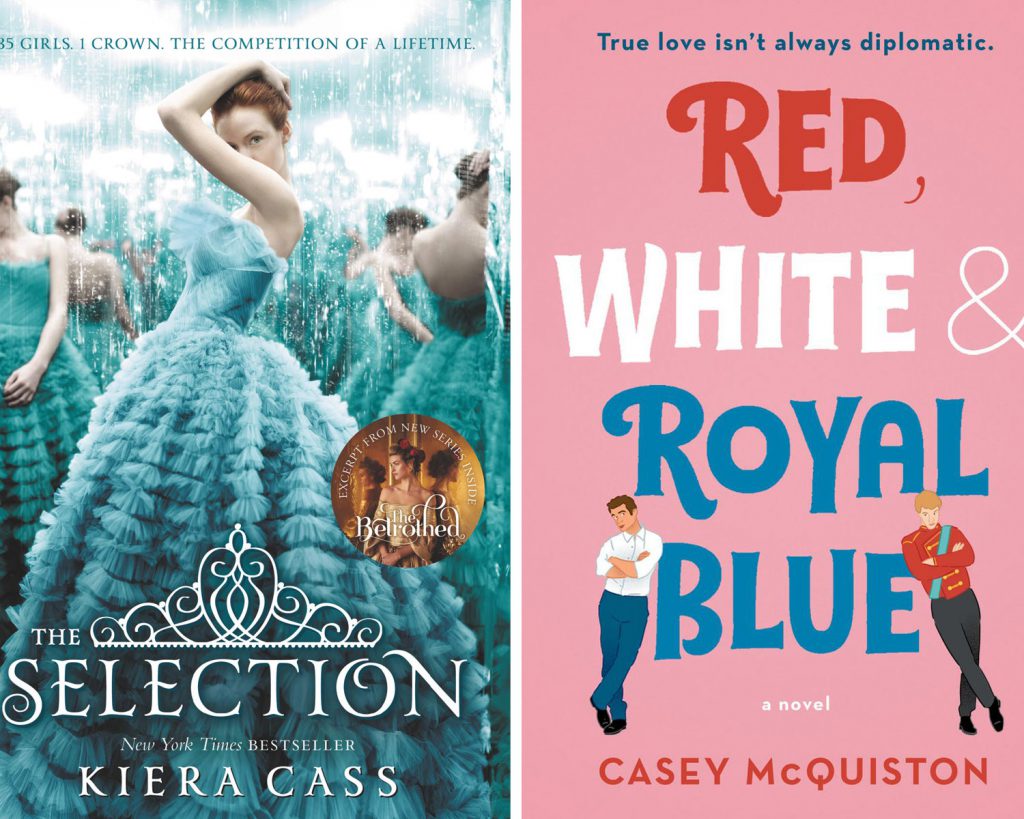 Red, White & Royal Blue is a hilarious and romantic Young Adult book that is almost impossible to put down. This romantic comedy is set in an alternate version of 2016, where a woman won the presidential election. Alex, the First Son, has one arch-nemesis: Prince Henry of England. After their long-held feud escalates to a disaster at the Royal Wedding, the two are forced to fake a friendship in the spotlight to smooth international relations, and it’s going to be absolutely terrible. After all, Alex hates Henry! … doesn’t he?

If you like the “enemies to lovers” story arc, you will absolutely adore this book. The writer, Casey McQuiston, is also a proud bisexual genderfluid person. Support your LGTBQ+ writers!

Although Normal People came out two years ago, it is the book to read right now. Following the huge success of the Hulu series adaption of the same name, this novel, written by Irish author Sally Rooney, became the most read book of 2020 on Goodreads.

At school, Connell and Marianne pretend not to know each other. He’s popular and the star of the school soccer team while she is lonely, proud, and intensely private. But when Connell comes to pick up his mother from her housekeeping job at Marianne’s house, a strange and indestructible connection grows between the two teenagers — one they are determined to conceal. 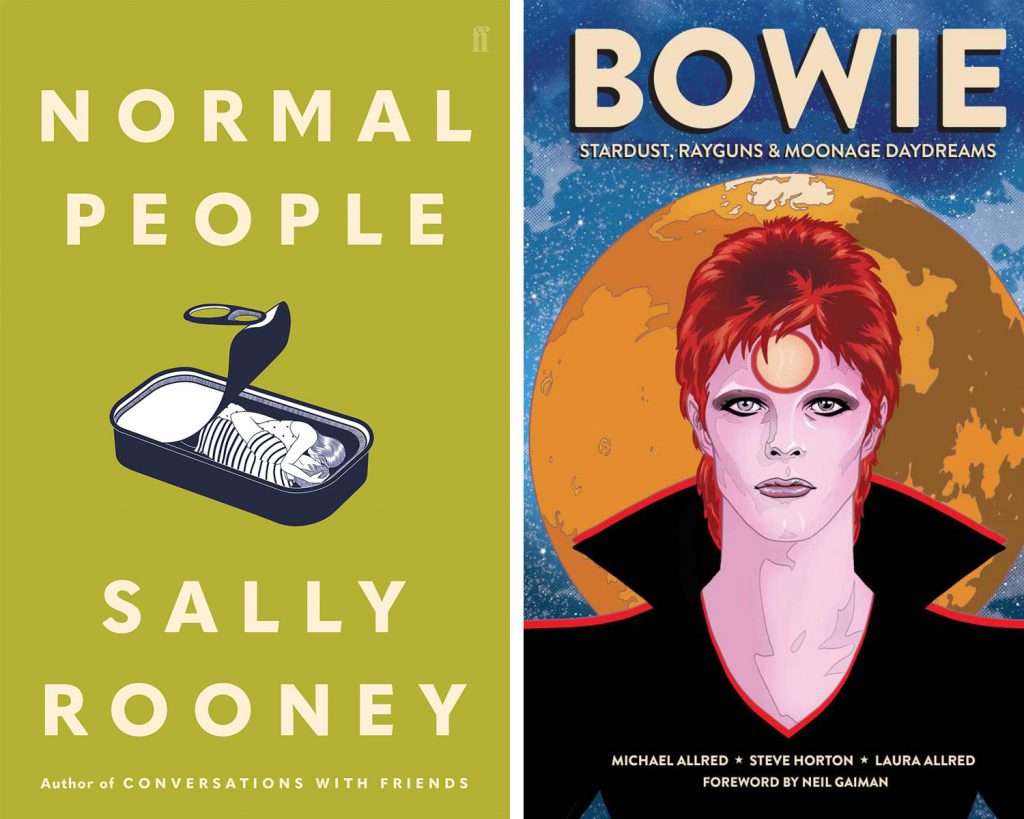 David Bowie wasn’t just a musician. His presence defied the boundaries of what we have always known an artist to be. Bowie: Stardust, Rayguns & Moonage Daydreams perfectly captures David Bowie’s extra-terrestrial, rock ‘n’ roll appearance by telling his story, not through words, but through graphics.

In life, David Bowie was one of the most magnetic icons of modern pop culture, seducing generations of fans with both his music and his counterculture persona. In death, the cult of Bowie has only intensified. This book is the original graphic memoir of the great Ziggy Stardust!

This memoir about the most influential man in fashion is a must-read! This engaging memoir tells with raw honesty the story of how André Leon Talley survived and thrived the style landscape despite the many challenges he had to face.

In the book, André shares his own personal struggles that have impacted him over decades, along with intimate stories of those he has turned to for inspiration like Diana Vreeland, Diane von Fürstenberg, Lee Radziwill, and so on. This book is also an ode to his Southern roots and ongoing faith, which have guided him since his childhood. 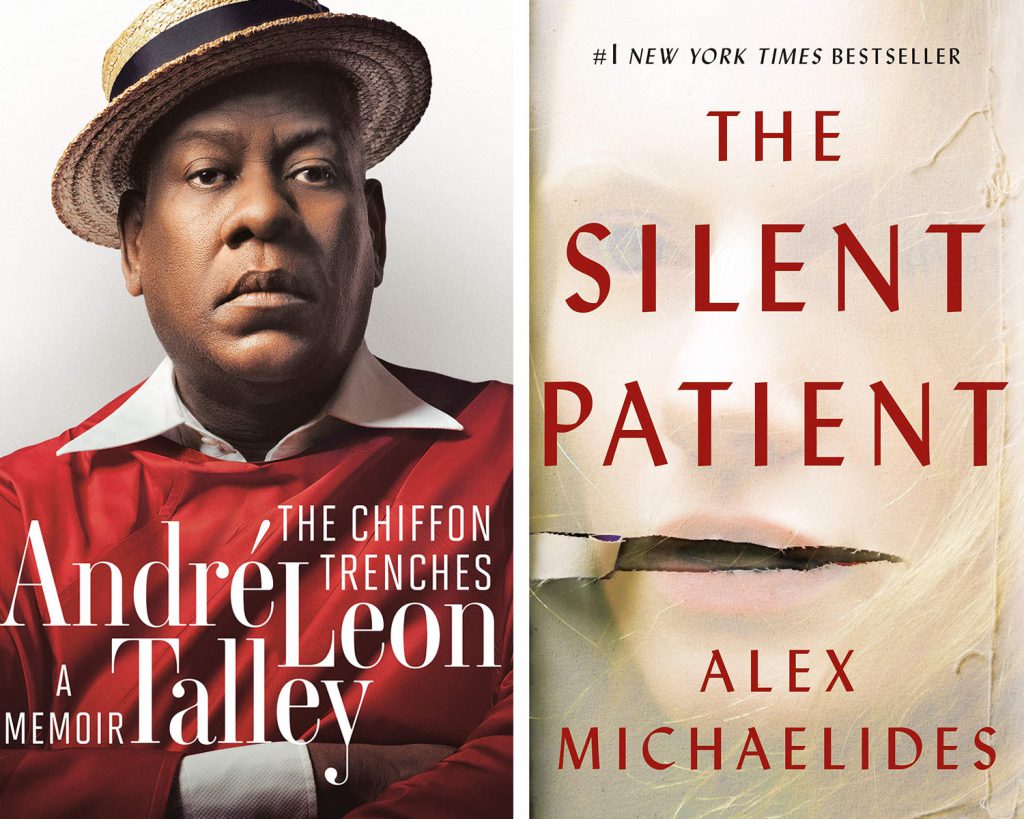 Alicia Berenson’s life is seemingly perfect. She is a famous painter who is married to an in-demand fashion photographer. One evening, her husband Gabriel returns home late from a fashion shoot, and Alicia shoots him five times in the face, and then never speaks another word. Theo Faber is a criminal psychotherapist who tries to get Alicia to talk and unravel the mystery of why she shot her husband. It takes him down a twisting path into his own motivations — a search for the truth that threatens to consume him.

Alex Michaelides’ The Silent Patient is a true page-turner with a reeling to-die-for twist! 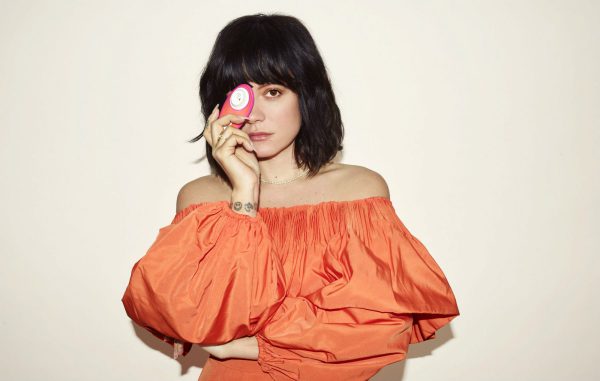 Lily Allen Comes Back With a Sex Toy and a Whole Lotta Liberty Let’s talk about sex, baby… and for some of us, the lack thereof (this editor included). But leave it up…

Manie Mania: Meet the Dutch DJ Redefining Club-Culture Mid-Quarantine In a world where most of us haven’t seen the inside of a club in over half a year, going… 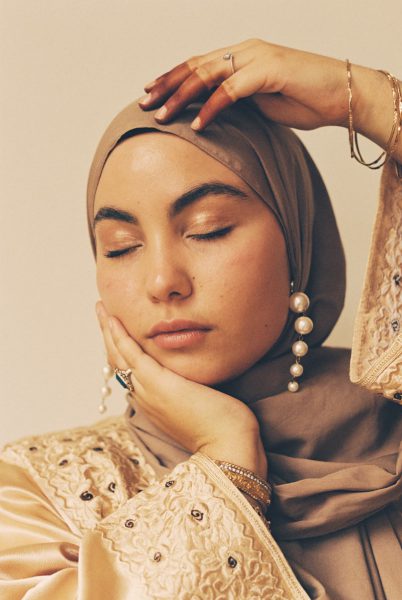 A Stroll Down Riffian Lane With Belgian Photographer Kawtar Ouh Capturing people’s voices. That’s what photography is all about for twenty-one-year-old Kawtar Ouh. For the exhibition, ANA-NESH in collaboration with… 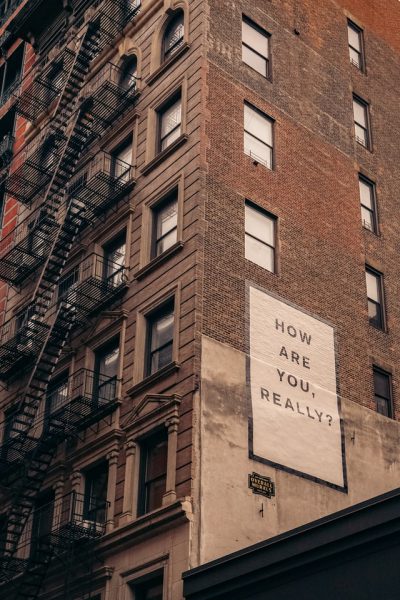