The Truth About Leopold II and Why His Statues Must Go

In the aftermath of the death of George Floyd in the United States, a movement has risen in Belgium that demands the removal of all King Leopold II statues. The former Belgian King colonized the Congo Free State in the late 1800s and murdered millions. Seven days ago, a petition was started on change.org demanding the removal of the King Leopold II statues. It has now been signed over 60.000 times.

We talked with assistant professor of history Dr. Benoît Henriet from the Free University of Brussels-VUB about former Belgian King Leopold II and everything he did during his leadership.

Who Was Leopold II?

Leopold II was the son of Leopold I, the very first king of Belgium. After his death, Leopold II took over and ruled Belgium from 1865 to 1909. At the end of the 19th century, a big conference was held in Berlin to divide the control of different parts of Africa between European governments. Leopold II received a personal colony of the same extent as the present-day Democratic Republic of the Congo.

Dr. Henriet elaborates, “The remarkable thing about Leopold II is that he was the private owner of the so-called Congo Free State. It wasn’t a Belgian colony, just his. At that time, it was very exceptional, and he was thus the only one to have a personal colony.” 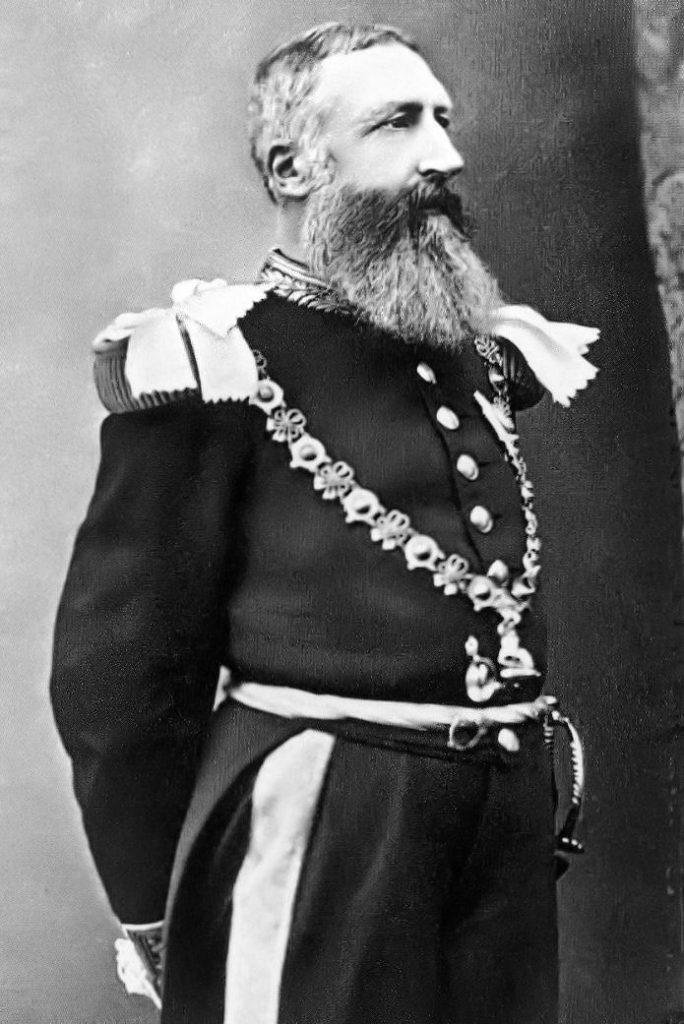 Seeing how much wealth the Congo Free State held, Leopold II started taking advantage of the abundance of raw materials in the country. What followed was a systematic exploitation of natural resources, especially rubber. This material grew naturally in the rainforest of Congo, which inhabitants were forced to collect.

“Many different strategies of forced labor were practiced to collect these resources by officials as well as different companies that were present. Workers were assembled by exercising violence like whipping people who didn’t want to cooperate. Inhabitants had no chance to flee, women were raped, and villages were plundered by soldiers and companies.”

Both state officials and companies were evaluated by the amount of rubber they would collect, so they started using extreme violence to gather more and more rubber, no matter the human cost. So, not only a system of systematic exploitation of natural resources was created, but also a system of extreme violence.

“Soldiers would cut off the limbs of people

as a war offering to the leaders”

“This exploitation caused an environment of extreme dehumanization. The Congolese weren’t considered as people that had to be protected. It became easier to exercise different ways of colonial violence, which even led to the cutting of limbs,” Dr. Henriet continues. “Private companies hired Congolese soldiers who were then given weapons. There was a shortage of bullets, so soldiers could solely use them on people, and not use them to hunt animals. To prove this, they were asked to bring back a severed hand or foot of the victim, as a sort of trophy. Soldiers would hunt animals either way, so they would cut off the limbs of people as a war offering to convince the leaders.”

Because of these inhumane acts of violence, millions of Congolese people were killed. While no official number is known, historians estimate a death count of 3 to 20 million. 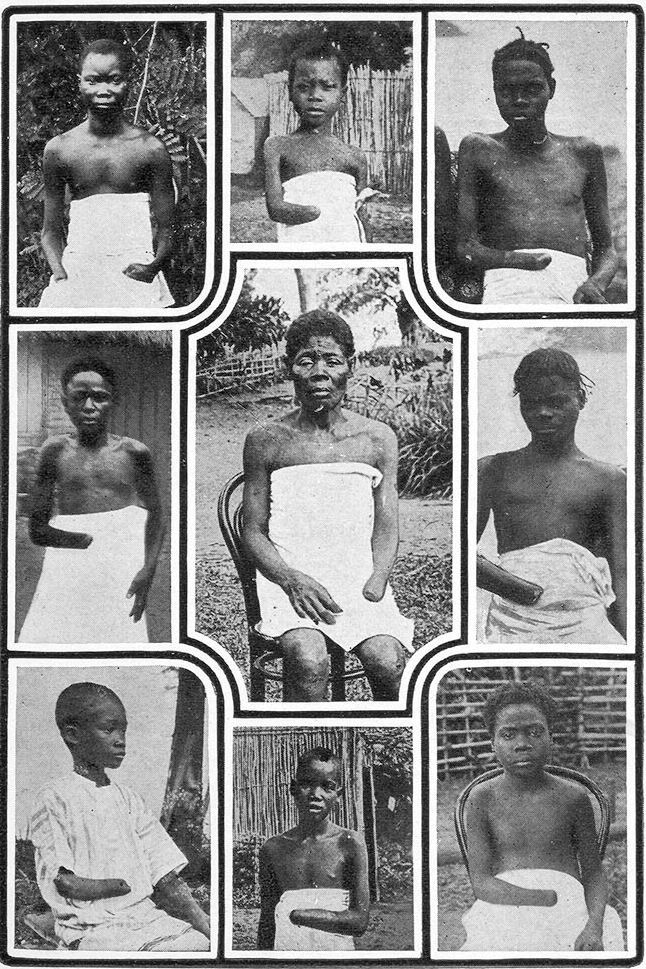 Limbs were often cut off as a war offering. Photograph by Alice Harris, Daniel Danielson.

Leopold II is often called ‘the Belgian Hitler’, because of the millions of Congolese killed in that period. However, we can’t speak of genocide when we talk about Congo. Dr. Henriet explains, “I understand calling Leopold II ‘the Belgian Hitler’ can be used as a provoking term to trigger nostalgic people, but a comparison isn’t really applicable here. Yes, there was a huge increase in the mortality rate in Congo, but it was very much linked to colonialism. It didn’t start with the exact purpose of exterminating the local inhabitants, while that was very much Hitler’s purpose. Leopold II’s purpose was to put these people to work and to suppress them. The massive mortality rate was the result of systemic violence. Of course, that doesn’t excuse all of the pain and suffering he caused on the Congolese people.”

The Influence of Belgium’s Colonial Past Today

The colonial past of Belgium definitely has an impact on modern-day racism, “We sometimes feel like events of twenty years ago don’t impact our society anymore. The United States makes it clear that there is a continuity between slavery and the current state of black communities in America. The same goes for Belgium. These deeply rooted traumas of colonization have impacted the perception of African people. That isn’t only the case for Belgium, but for countries all across Europe and formerly colonized countries as well,” Dr. Henriet clarifies.

the perception of African people”

Even though the colonization of Congo still impacts racism in Belgium to this day, the Belgian Royal House has never really commented on the matter. “The Royal Family is very cautious when it comes to talking about Congo. Belgian experts explicitly asked the Royal House to react or apologize, but they always declined. Their official statement is that they don’t have any relationship with Congo since its independence in 1960. So it would be bizarre to give a speech about it,” Dr. Henriet adds. 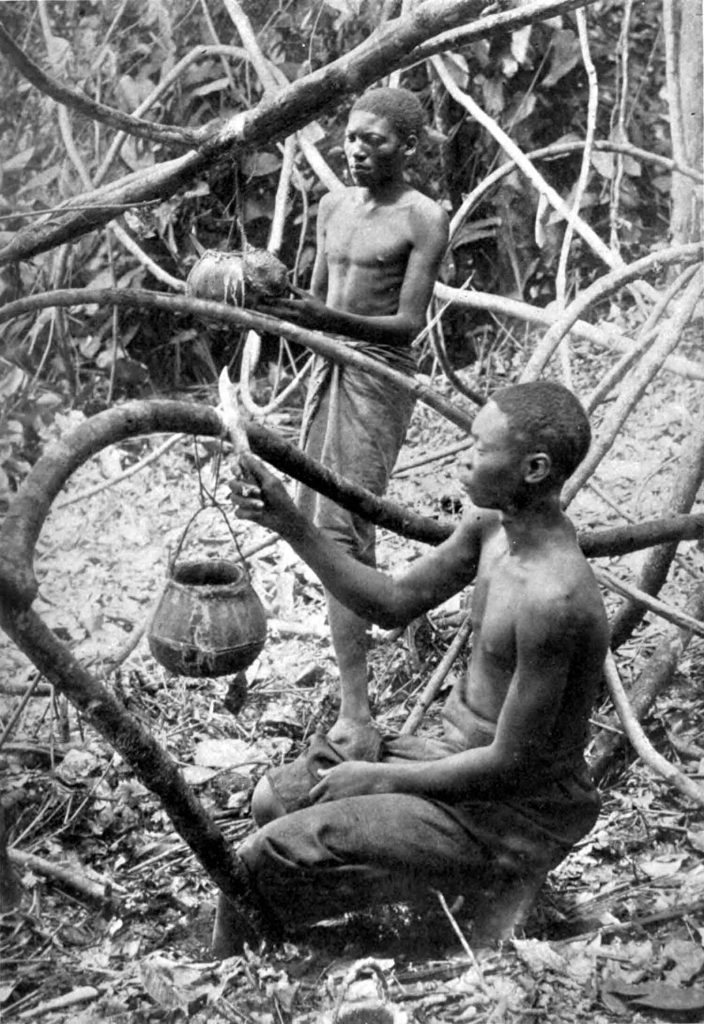 Gone with the statues

Even though Leopold II murdered millions of Congolese citizens and used them as slaves, Belgium still has a lot of statues of him throughout the country. Dr. Henriet explains, “When he died in 1909, he was extremely unpopular. But in the decennia after his death, his honor was restored. He was a royal figure and a big pioneer in Belgian colonialism, but he was also a very ambitious architect. He was sometimes even called the Builder-King”

he was extremely unpopular”

Since June 1, a petition has been circulating through Belgium to remove King Leopold II’s statues in Brussels. Initiative for the petition was taken by a group of Congolese youth in Belgium, inspired by the anti-racism protests in the United States. “Despite all the contempt he had for the Congolese people, Leopold II is still honored throughout Belgium. That’s why we ask the City of Brussels to remove every statue in honor of him,” says the petition. “Brussels has 118 residential areas that represent almost 200 nationalities. It’s the capital of Belgium and Europe, so these images no longer belong in Brussels nor in Belgium.”

King Leopold II statues were vandalized throughout the Flemish cities Ghent, Hasselt, Brussels, and Ekeren. They were covered in red paint to symbolize the bloodshed. Several statues were also covered with bags that had the words “I can’t breathe” written on them as a direct reference to George Floyd’s last words.

“As a historian, I can’t really form an opinion about these happenings. However, I do understand that people see these statues as a symbol of violence against people of color. These statues immortalize everything that has happened in Congo and remind people of it every day,” says Dr. Henriet.

“This is about reducing the racial gap

“It’s also very important to link the dismantling of these statues to the wider agenda of activists. It’s not only about the statues, it’s about recognizing systemic racism that’s deeply rooted in our mentality. This is about reducing the racial gap in Belgian society. We have to keep that in mind when we think about these statues and the petitions,” Dr. Henriet concludes. 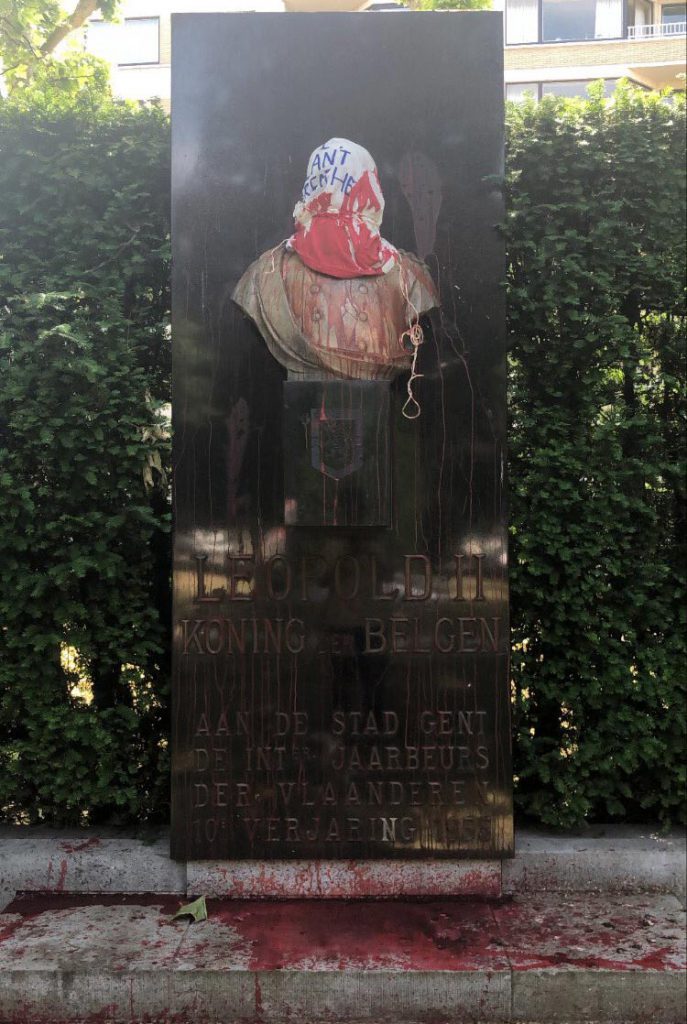 The start of ending racism

Amadou Cisse (22) is a black man living in Belgium. Amadou explains that these statues are more than just statues, “First of all, a statue represents someone that has done good things to others. To have a statue of somebody, he must mean something to the community. Leopold II’s statues stand for the colonization of Congo, but not the people he killed and tortured in Congo and its surrounding countries. The Belgian people see the statues as praise and are proud of them, however, the black people see it as a threat. It keeps reminding us of the bad things Leopold II has done to our people. Someone who cut other people’s hands, put them in a zoo, and slaughtered them should not be praised and definitely doesn’t deserve a statue.”

“When the statues disappear, we will feel protected and safe in Belgium. We will feel welcomed and accepted because those statues represent bigotry, oppression, and hatred for too many people right now. By removing these statues we won’t be reminded as often about the terrible things he has done to our people. I think the statues should be kept in museums and not in public places,” Amadou says. 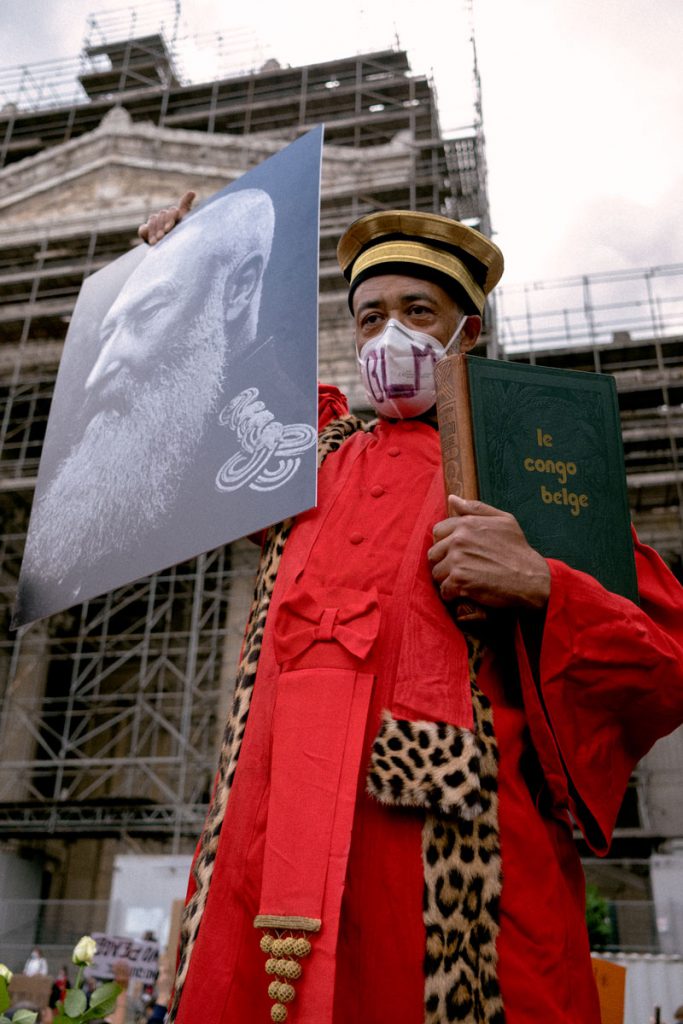 “Removing these statues is the start of ending racism. It will help us to know that we’re not here standing by ourselves but are being supported by others who acknowledge the past. Few people know the true history behind these statues of Leopold II. There’s a lack of education about Belgian history. The cruel things Leopold II has done are never taught in history classes, instead they are hidden and never spoken about. This should be the starting point for change.”

With the number of statues that are placed in Belgium, it’s basically a huge fuck you to people of color, especially black people. It sends a message of bigotry and blatant racism. Removing these statues isn’t removing history but acknowledging that King Leopold II should not be praised in any way.

Sign and share these petitions to remove the statues of Leopold II in Belgium; Brussels, Ekeren, Halle, Hasselt.

The “Make 2021 Sexy Again” Calendar Makes 2021 Already Sexy Again The ‘Out Of Office’ mails are reaching our mailbox, which only means one thing: a new year is very near.…

From New York Back to A-Town: Coming Home With DJ Lady S  Never home but always representing… we caught up with the Moroccan but Antwerp-raised, currently New York-based, DJ and producer DJ… 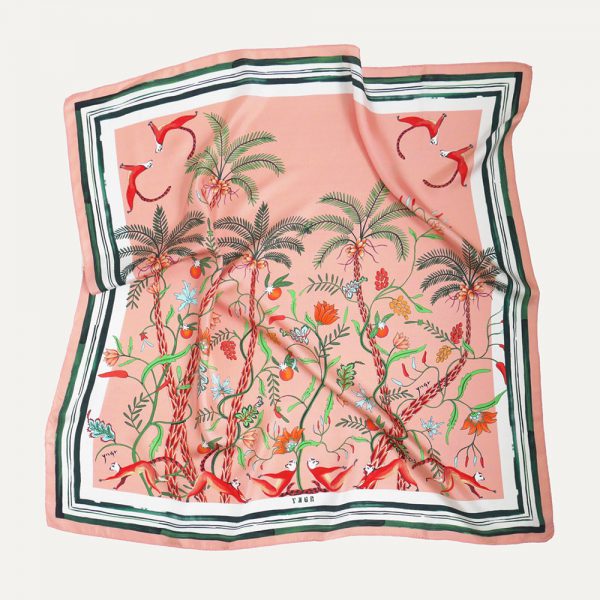 Our Wonderful Gift Guide PT 2 As if our first gift guide wasn’t enough, we’re here with even more inspiration. We just don’t want you to… 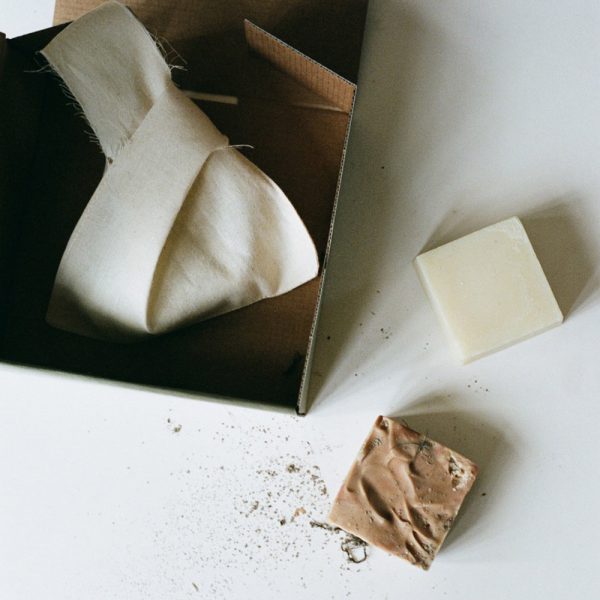 Our Wonderful Gift Guide PT 1 The holidays are approaching quickly so whether you have something to receive or something to give, it’s about time to…
X