Do you ever discover an artist and instantly wish you were friends? We feel like that with the 19-year-old London powerhouse Griff. This DIY queen does not only write, play, and largely produce her own soulful pop songs, but also sews fashionable looks. Last Wednesday, she did an amazing livestream concert with HONNE as a special guest, and we caught up with her.

For your livestream concert you wore all pink, was that a reference to Mean Girls because on Wednesday, they wear pink?

Oh my gosh, I wish I could say it was, but actually, it wasn’t. I was able to perform at the Tate Modern Museum, and the space was very brutalist with a lot of concrete and it looked dark and industrial. It needed a pop of color to bring it to life, so we decided to just do pink.

Yeah! Fortunately, Gucci sent me the first outfit that I wore during the concert, an all-pink suit. However, halfway through the show, I switched outfits and for the second look, I made the top myself. It was a nice combination of wearing things that I made myself and high fashion brands. 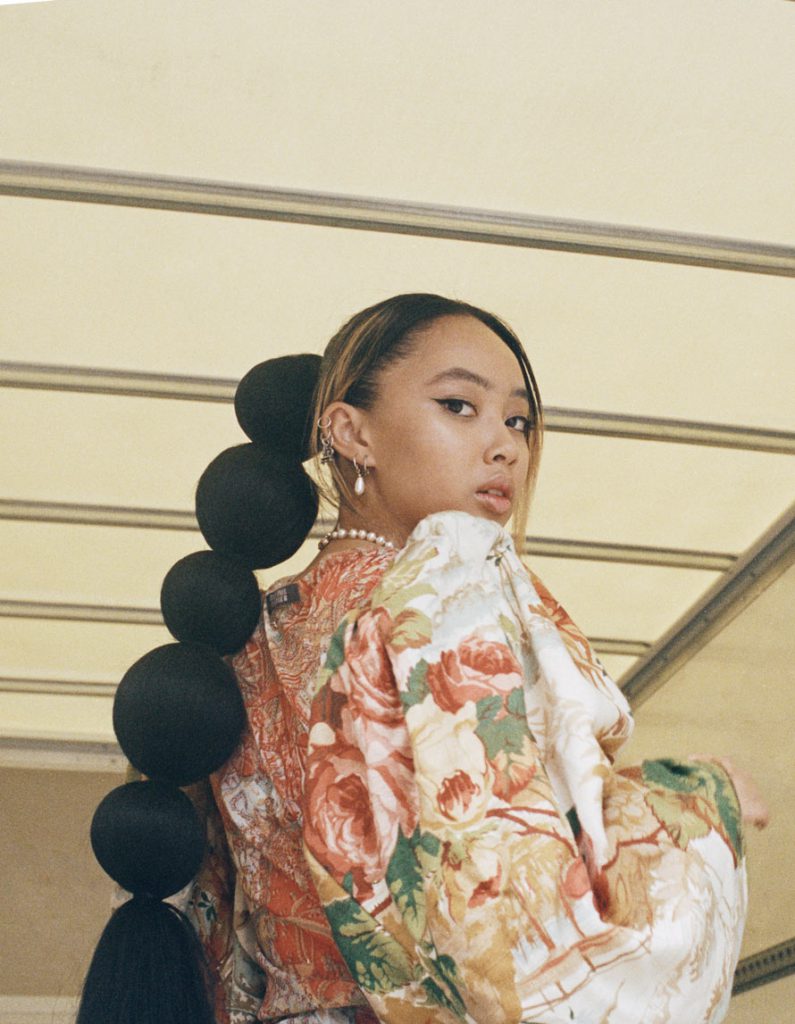 I really like creating things, it doesn’t matter what it is. I’m a bit of a control freak and I like doing everything myself. So, I love making my own clothes because I am completely in control and can make something from start to finish.

What was it like performing without a real-life audience?

It was so strange. You know what the weirdest part was? When you end a song and you go into the next song, there’s no applause, so it’s just awkward like, “… okaaaay, now going to the next one.” But in my head, I treated it more like recording a music video so that I wasn’t expecting any audience engagement.

What was the best part of the performance?

Honestly, I was so excited when I found out we could do it at the Tate Modern. Everyone is doing live shows, so you need something that sets you apart. I used to visit the museum a lot as a teenager to look at the art, so performing there was such a dream.

Because of COVID-19, the space was cleared out, so there was no art. We really wanted to put an art context around it, so we had these live drawers on stage with me. They were from a super diverse art collective called 2bornot2b, it was so cool.

Were you nervous to sing for an online audience?

I’m always nervous to perform, however, if it’s just a normal live show, and you sing a bad note, you move on and people forget about it. But this performance will always exist on the internet, and people can always go back to it. That made it more nerve-wracking to do. But still, I had a lot of fun and felt proud of what the team and I achieved.

It’s a shame you can’t do real-life gigs now, but how are you dealing with the pandemic overall?

I’ve been doing well throughout it. I just felt very blessed that I still have a studio space in my bedroom. So, despite everything, I can still create music and be with my family. Also, if you’re a musician, you already spend a lot of time by yourself, isolating in a studio anyway, so a lot didn’t feel all that different.

But then, a lot of people are struggling and feeling lonely but not saying anything. Some days, even for me, it feels like you’re never getting out of it like you’re going insane in your room with your own thoughts. What’s amazing though, is that while everything is shut off, we still have social media and the internet, where we can escape to and connect with people. 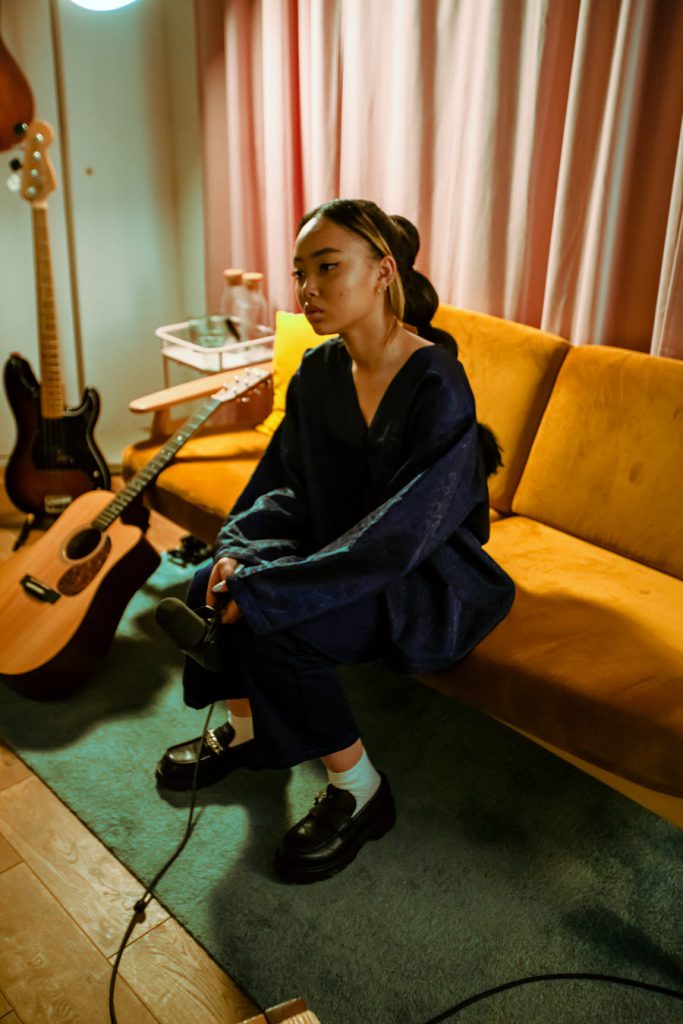 You’re open about mental health issues and even wrote a song on it, called “Say it Again”.

Around two years ago, a lot of my friends were struggling with eating disorders and other mental health problems. When people are struggling, you often have no idea what to say or how to help, so I felt super helpless. That song says that the only thing you can do, is to say and believe that it’s going to be okay, again, and again, and again. Fortunately, I haven’t struggled in severe ways, but mental health issues surround us everywhere. So, of course, it works its way into my songs and life.

Just a few weeks ago, you dropped another banger about having bad days: “1,000,000 X Better”, with the British electronic duo HONNE. You also performed together for the live-stream. What was it like working with them?

Back in December, I saw that they followed me on Instagram, and they actually DMed me and told me they loved my music. I was a bit starstruck because I had been listening to their music for years now. Also, I had no idea they were from London, so I just said, “If you’re ever in London, I would love to work with you.” They replied, “Well, we live in London.” (laughs) The band was not on tour at the moment, so literally the week after, we got into the studios and made that song. They were the nicest guys ever, so it was really fun.

Another personal favorite is your single “Good Stuff”, about your family. Could you tell us more about them?

I’ve got a mum and dad and two older brothers, and we’ve been fostering since I was about eight. So, kids in care come to live with us, sometimes for years, but they always move on to either get adopted or find a more permanent place. Growing up, I experienced a lot of people coming into my life, becoming part of my family and then they completely leave, and I never see them again. I put those feelings in “Good Stuff”. 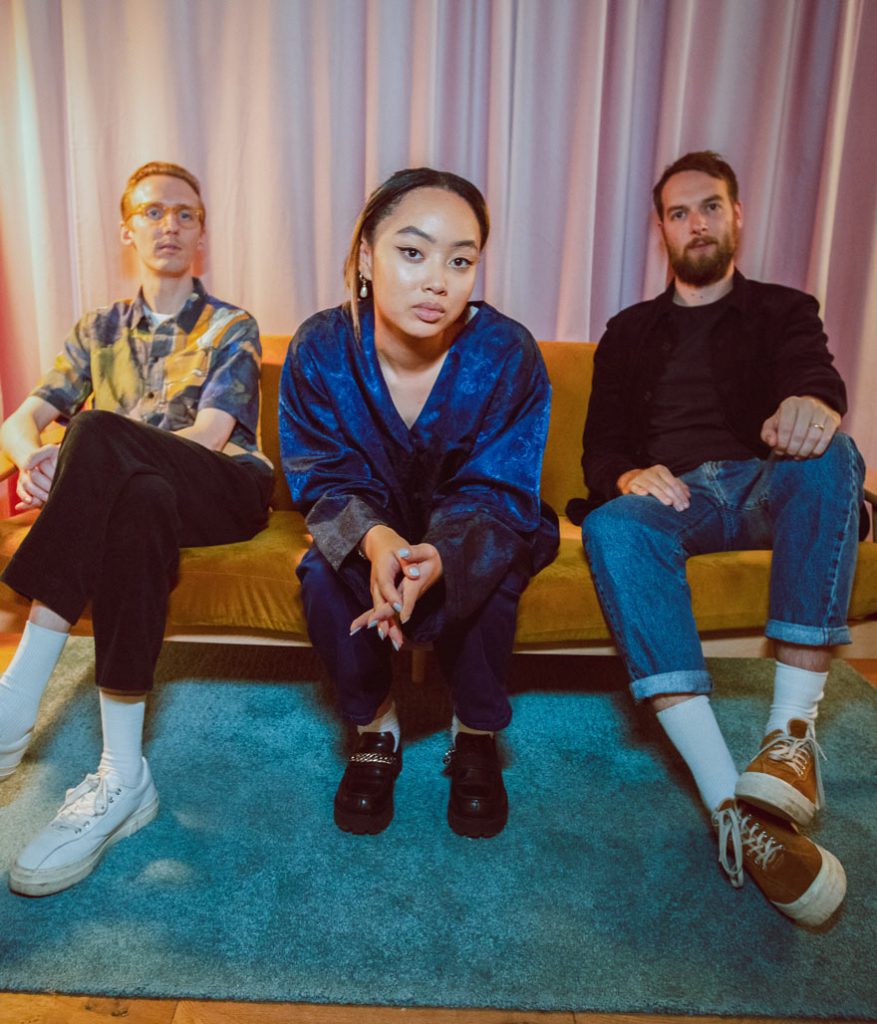 Griff with the guys of HONNE, right before the online performance.

What was it like growing up with parents who both have an immigrant background?

My mum is Chinese but born in Vietnam, and after the war, they kicked out all the Chinese people and she immigrated to the UK. My dad was born in the UK, but his parents were Jamaican and were part of the Windrush generation. I grew up in a very white area, and I was one of the only girls in my school of color. So, I became used to sticking out and not looking like everyone else. But being this weird heritage mix you don’t see very often is all I’ve ever known.

Did people treat you differently?

Yeah, and they still do. I never had any severe racist experiences, but when the Black Lives Matter Movement erupted and I was in lockdown, I reflected a lot. Only then I realized that I had changed a lot about myself to fit in more. For instance, I had to be really well-spoken, just had to work a bit harder, and I still straighten my curly hair all the time. As a kid, you don’t realize certain things, but now looking back, I’m like: “Hang on a second, there were so many moments where I was treated differently.” That sucks, but the world is changing.

The pandemic gave you time to reflect, so what’s the first thing you want to do after life is back to normal?

First, I really want a holiday, just do some traveling and then, hopefully, tour. Where I’d love to perform? Well, I feel like I should say Belgium since you’re a Belgian magazine. (laughs) But I’d love to go to Asia, and I’m actually keen to perform everywhere, wherever they would have me. I have a Christmas song coming out soon, super exciting, but I can’t tell you any details yet. Like everyone else, I don’t know what the rest of the year will look like, but that single will be there for sure.