Best Dressed of the 2019 Venice Film Festival by Louis Pisano

Whew child, I don’t know about you, but I’m utterly exhausted. If you’ve been living under a rock for the past eleven days, consider yourself one of the lucky ones! The Venice Film Festival has FINALLY wrapped itself up (if I never have to see another layered tulle gown or a nude illusion, I’ll be the happiest boy in the world so I guess I will be quite unhappy for some time to come).

Hollywood icons, fresh faced ingenues, Victoria’s Secret models, B-list bloggers, attention seeking porn stars and the who’s who of the Italian trash TV circuit have descended on Venice creating a bigger buzz than those pesky mosquitoes on the lagoon. Nine days of fashion day and night. Some absolutely killed it and some… well, their stylists or should I say lack of, killed them. With an ever-present eye on the happenings on the Lido from the taxi boat disembarkation photo opportunity to the glamour and adrenaline rush of the red carpet I’ve arrived at my final judgements. Ladies and Gentlemen, the good, the bad, the just plain throw it away in the Grand Canal ugly.

Day one legendary supermodel Iman brought it like it’s haute. Haute couture that is. Gliding along the red carpet regally like a bird of paradise Iman took a turn in an exquisite feathered “birds in flight” cape from the Valentino F/W 2019 Haute Couture collection.  While she could have just slipped on a gown and called it a night, Iman flying high set the bar for fashion at Venice with this bold, dramatic and unconventional red carpet look. Unfortunately, not everyone was able to reach that bar. 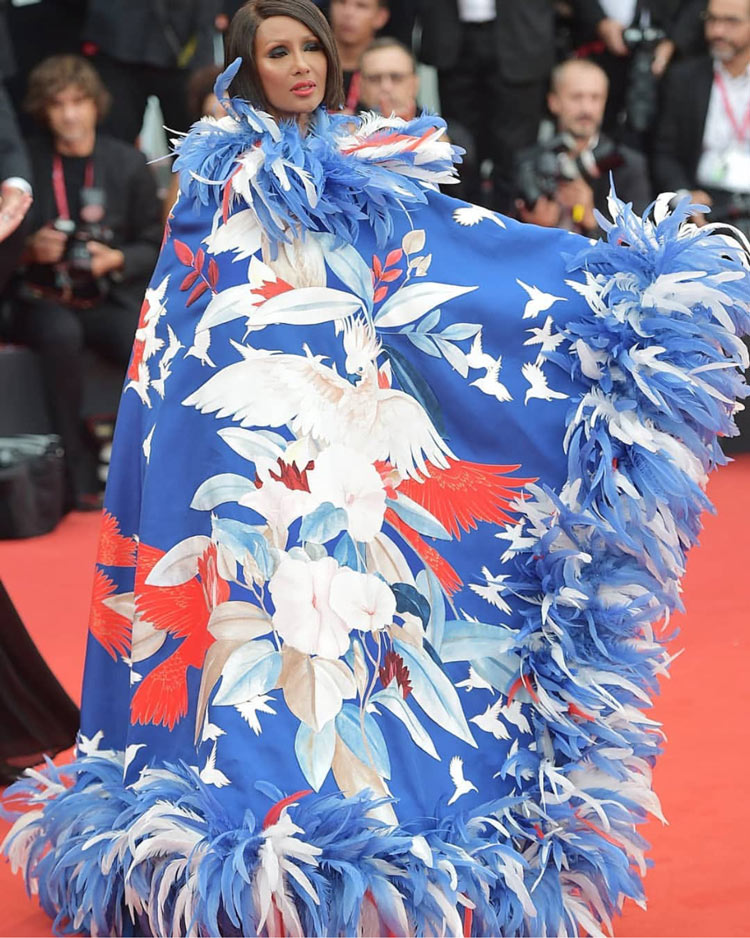 Day two brought us the exquisite Liv Tyler in a Givenchy F/W 2019 haute couture gown that at first glance had me howling “There’s a trash bag on the carpet. Take it out!” However… however, I started looking at it from all angles and came around to the effortlessly chicness of it. From the voluminous sleeves which had me hooked by the sheer drama of them hanging off her exposed ivory shoulders. Making my way up I stopped and gawked at the Bulgari rose gold earrings with amethysts, mandarin garnets and diamonds that complimented her purple winged smokey eyes. When Liv Tyler gives us Givenchy gothic goddess, she gives it to us good! 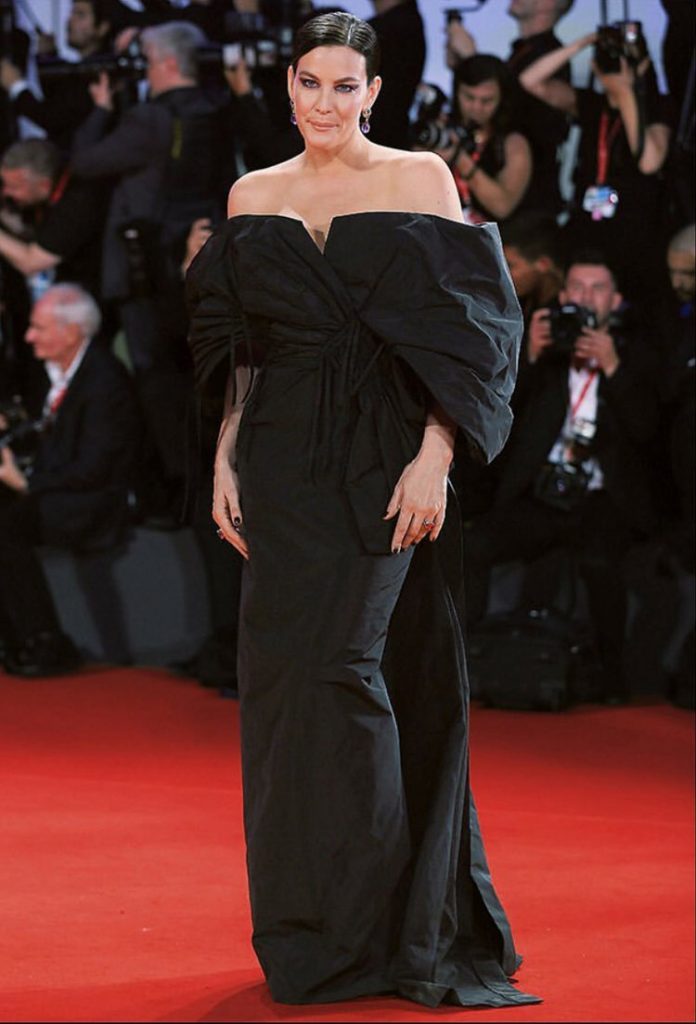 On day four amidst a red carpet that was turning into a horror show Penelope Cruz came to the rescue with a swan lake fantasy in Ralph & Russo F/W 2019 Haute Couture accentuated with Atelier Swarovski by Penelope Cruz Fine Jewelry (come through collaboration!). Yes, it’s layered tulle but it’s a glamorous and romantic tulle look as opposed to tulle worn for the sake of conscientiously taking up as much space in a room as in the frame of an Instagram shot. With an updo and a red lip Penelope brought it like royalty. Sorry Letizia, but for that night there was a new Queen of Spain. 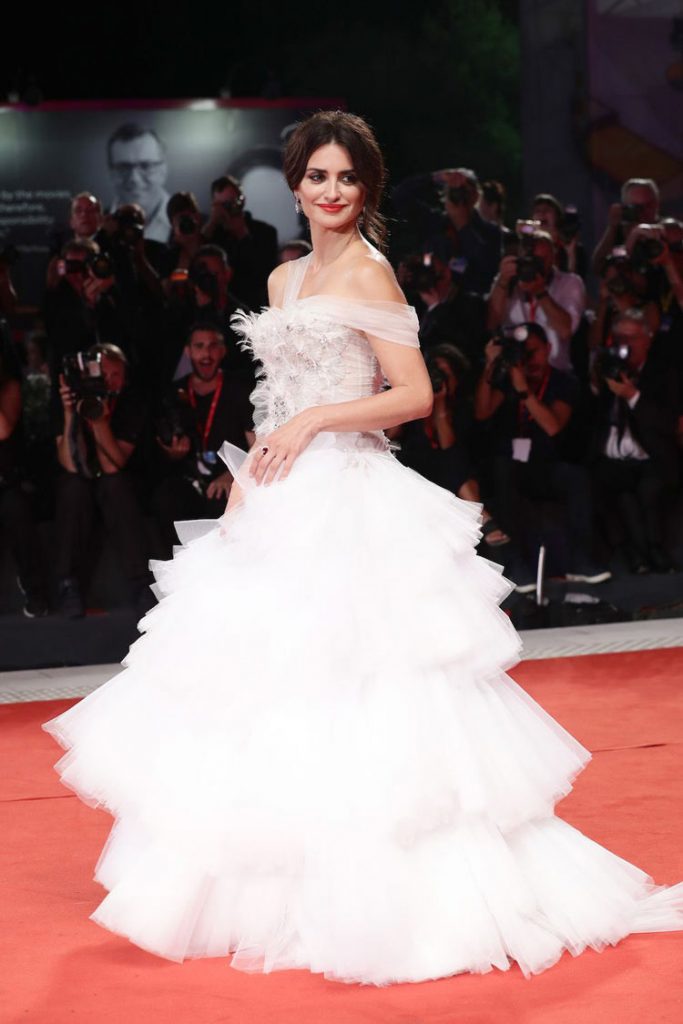 Day four also brought us funky Zazie Beetz in a colorful nature patterned off the shoulder Valentino F/W 2019 Haute Couture gown with larger than life motifs, ruffles and poofy sleeves. What I’m super obsessed with is that even though this is a couture dress it’s totally fun, relaxed, and easy. A departure from the often traditionally and somberly formal gowns that tend to dominate the film festival red carpets. With continued style statements like this Zazie Beetz can’t be beat! 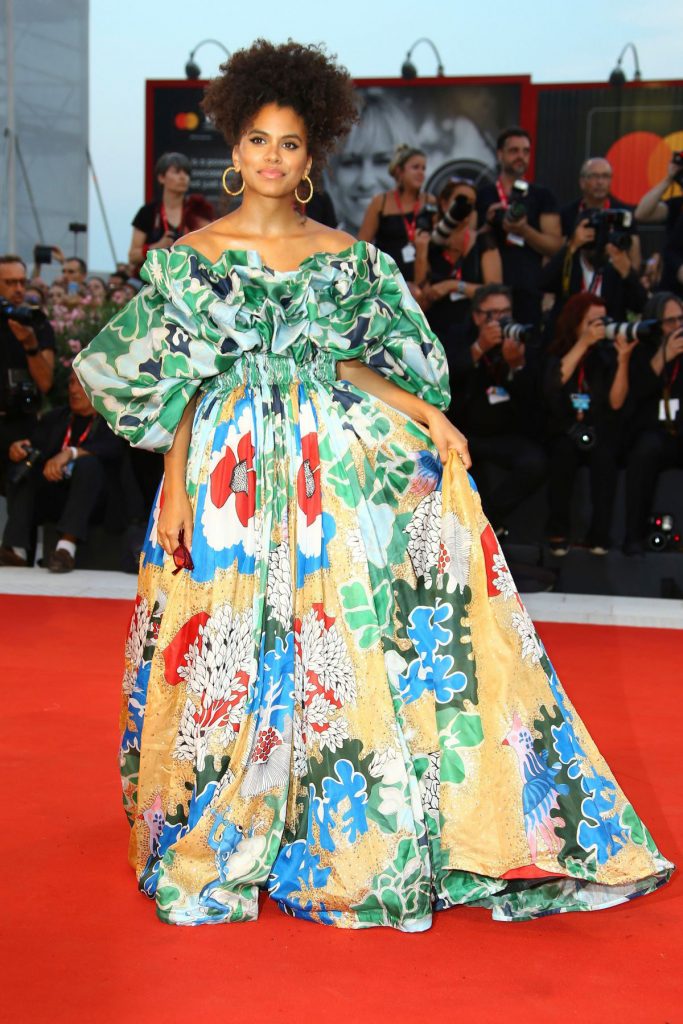 Movie stars weren’t the only ones rising above the fray. Italian influencer Veronica Ferraro didn’t come to play, she came to slay okay and Shante she stays! In a pale pink corset bustier and 50 yards of silk tulle the princess fantasy was in full effect with this custom Blumarine gown. With a snatched ponytail and Damiani jewelry it’s clear that this is one damsel not in fashion distress! 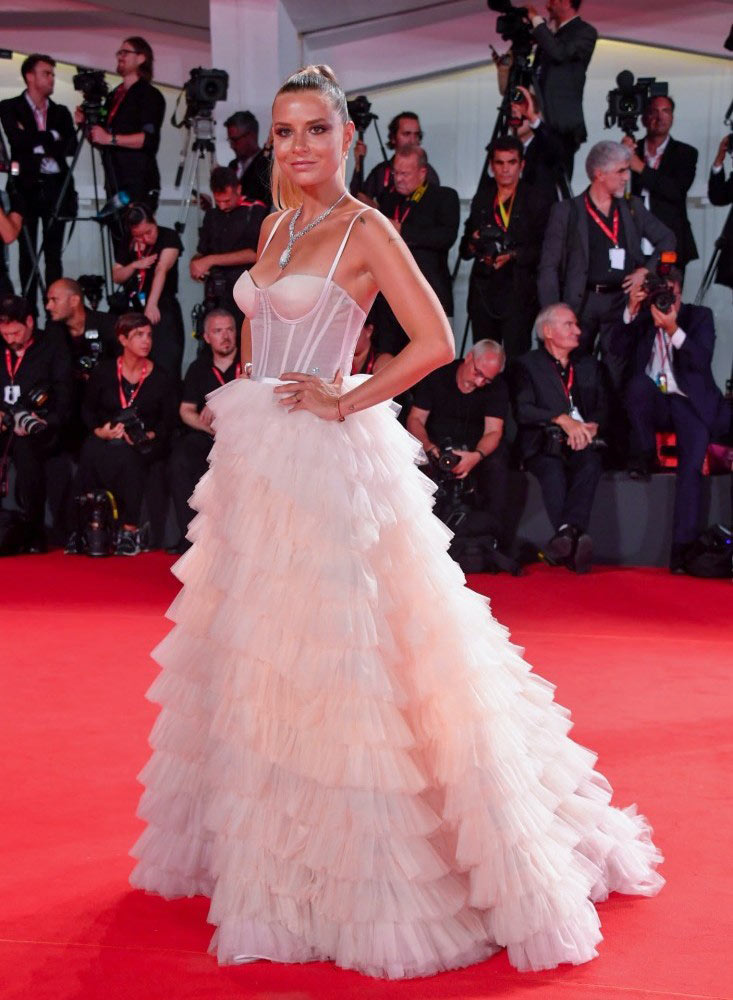 Another influencer living her princess fantasy was Chiara Ferragni on the eve of the premiere of her documentary. Donned in Dior she dazzled like a night sky in her dark blue sparking tulle from the French house’s F/W 2019 Haute Couture collection. With a low cut back and dramatic side swept waves she channeled old Hollywood icons while leading the frontlines of the new era of the social media celebrity. 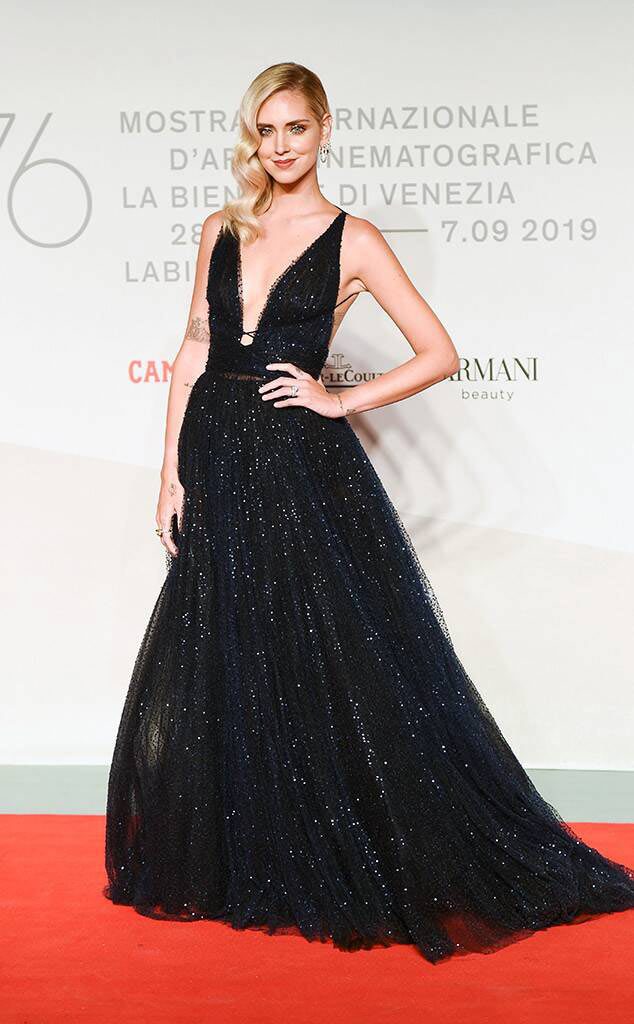 While many opted for gowns that seemed to need their own postal code, model Madisin Rian went for sleek and streamlined. In an Armani blue sequined gown that seemed to cascade down her body like a waterfall and compliment her glowing skin Madison dished it up and served it to us on a platter. Smoldering under a blue smokey eye courtesy of Armani Beauty and a burgundy lip Madisin was a vision of after-dark elegance. 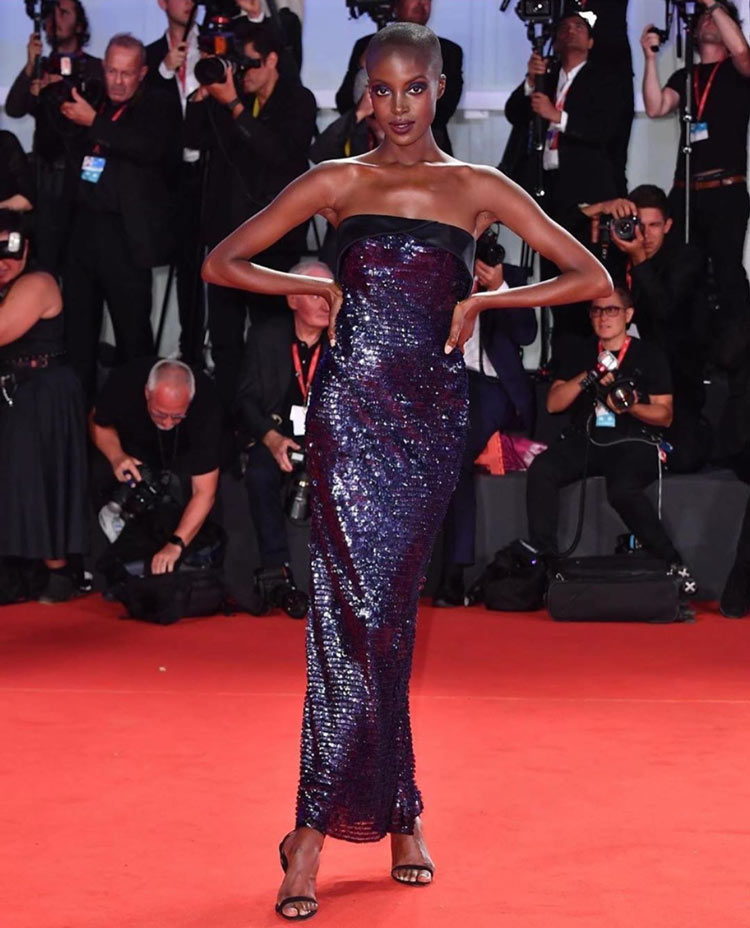 Black is usually boring on the red carpet. Nude illusions are played out. Velvet often reads as dated. Put them all together and the result is stunning as evidenced by Laysla de Oliveira bewitching in this black magic from Reem Acra’s Fall 2019 collection. Glittering from her crystal embellished décolletage down past her belly button like shattered obsidian, Laysla turned out to be the dark horse of the red carpet. With a natural glam and simple slicked back hair she clearly understood that this gown carried its own weight. 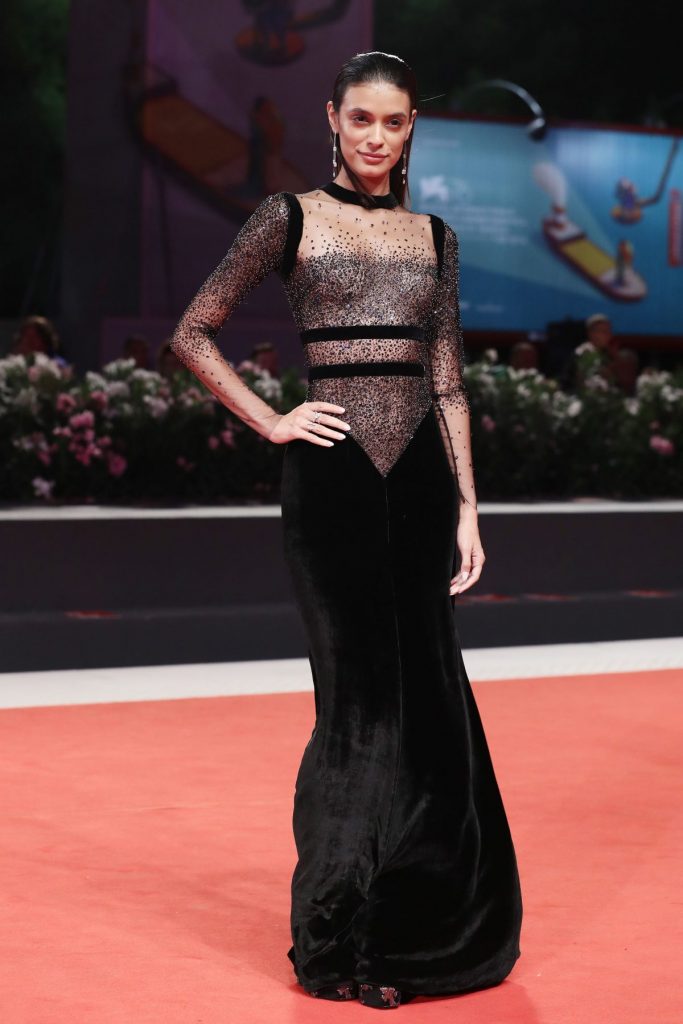 Jury member Stacy Martin clearly had a trying challenge ahead of her. Eleven days straight of multiple red carpets each day so the few occasions where she was fashion roadkill were understandable. Some days she hit it out of the park. One of those days being the second to last day of the festival when Stacy showed up in this scintillating Giambattista Valli Spring 2019 Haute Couture dress. Completely covered in sparkling crystals and shimmering paillettes with floral appliqué over the sheer top. It had my jaw dropping as it was a much-desired departure from her usual black looks. To some it would scream cocktail hour, but when you’re that blinged out it becomes red carpet ready. It’s the perfect dress to show off those crystal-covered chain link heels by Giambattista Valli as well. Twinkle, Twinkle little star, Stacy Martin you’ve come far. 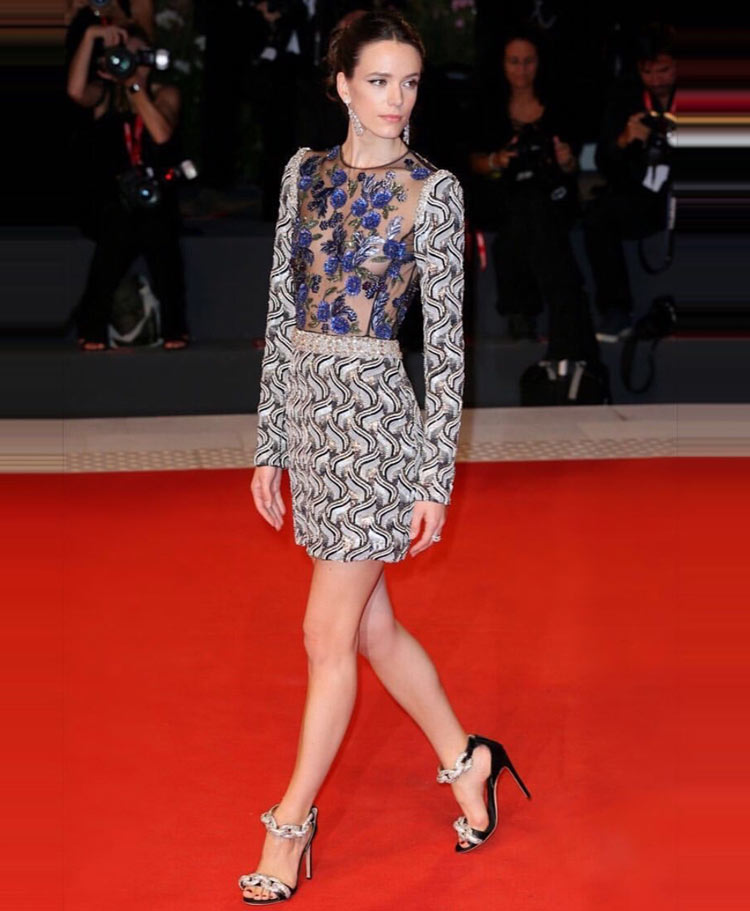 Last but most definitely not least in one of my favorite red carpet moments of the Venice Film Festival is Ms. Lily Rose Depp. My god! When she emerged from her car and the wind started blowing it was like a movie! Posing on the blustery carpet as her lilac chiffon Chanel F/W 2019 Haute Couture dress whipped around her willowy frame the drama was at an all time high! I adore that she kept it simple opting for a natural glam with dark eyeliner, a pair of drop earrings and a messy updo. Yes, I know it’s a plain formal gown, and yes Chanel reads as stuffy at times but Lily-Rose adds an injection of youth and energy into whatever she wears from the Maison. She has that je nais se quoi. 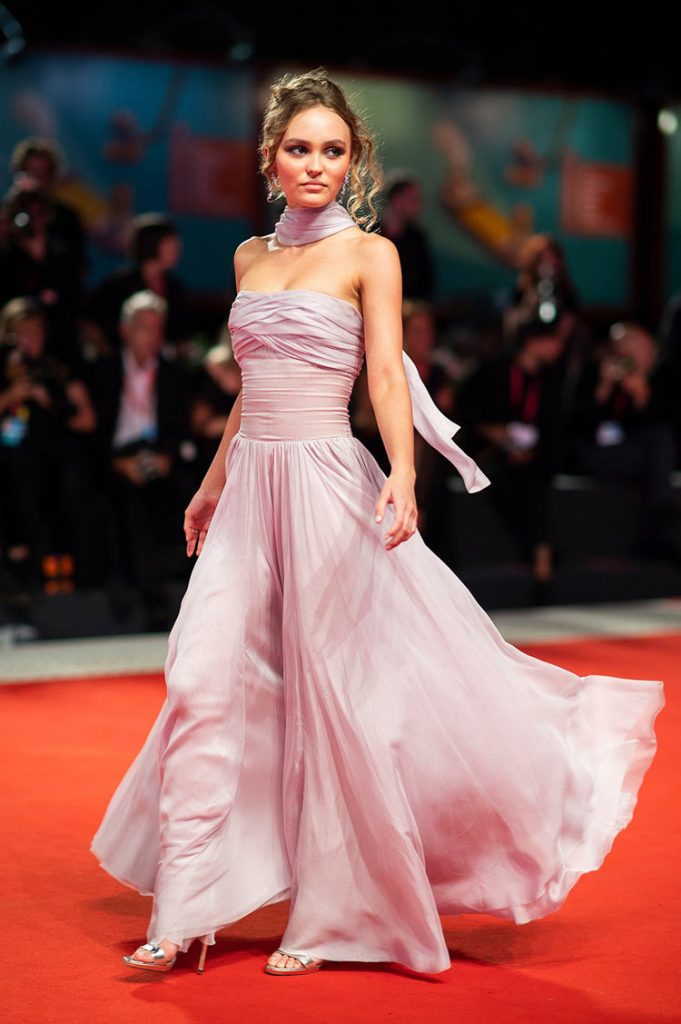 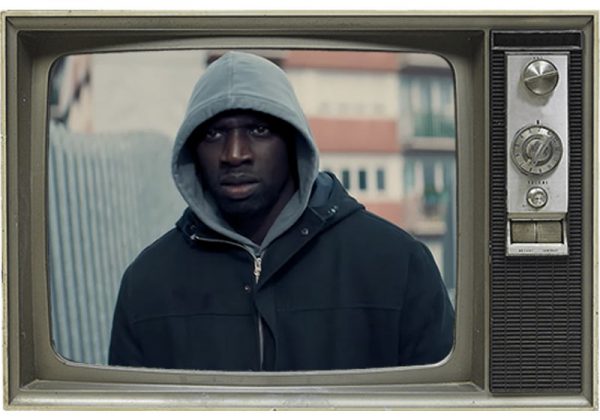 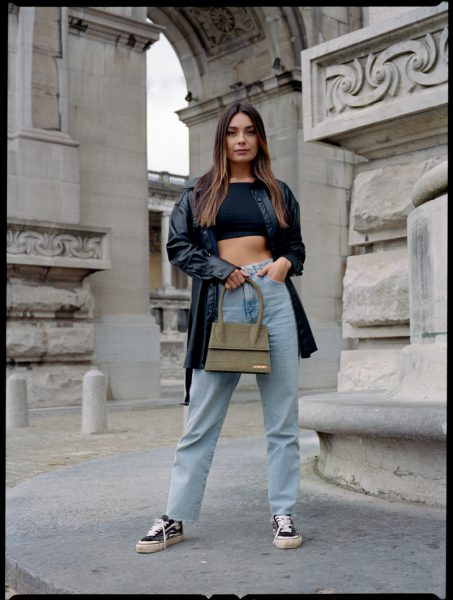 Designer Darlings: Tonya Mas’ Jacquemus Chiquito Bag Our frequent readers must be familiar with our fashion series Designer Darlings, which we introduced earlier this year. Together with…
X